#7 on the list of the top Canucks seasons of all-time: 2002-03. This season held out the tantalizing potential of Stanley Cup glory but that ultimately ended with a disappointing second round loss to the Minnesota Wild. Nonetheless, there were some notable accomplishments for Canucks fans to celebrate, including First All-Star Team berths for Markus Naslund and Todd Bertuzzi and a Lester B. Pearson Award for Naslund. 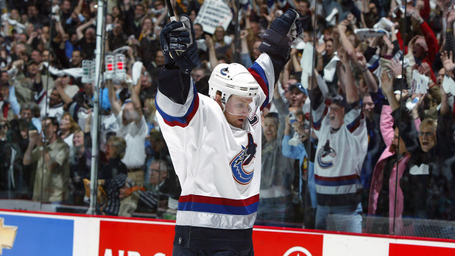 Markus Naslund was very good at hockey (via 3.cdn.nhle.com)

Result: Lost in second round to Minnesota Wild (4-3)

Diehard Canucks fans are a resilient bunch. Years of seeing promising teams sputter in the clutch have forced us to develop a thick skin and a significant reservoir of patience. 2002-03 was one of those seasons that held out the tantalizing potential of Stanley Cup glory but that ultimately ended with hopes unrealized and lingering questions about whether the team could get to the next level. Nonetheless, there were some notable accomplishments for Canucks fans to celebrate despite the team's inability to progress past the second round of the playoffs.

The 2002-03 season came toward the end of a period of intense rivalry between the Canucks and the Colorado Avalanche. The Avalanche was a dominant team that was two years removed from winning the Stanley Cup and had won four consecutive Northwest Division titles. 2002-03 seemed like it might be the season when the Canucks would finally surpass the Avalanche and seize the Northwest crown. The West Coast Express line was emerging as a dominant force, the Sedins were providing solid second line support, the defense corps was strong, and Dan Cloutier seemed, in spite of his infamous gaffe against the Detroit Red Wings in the 2002 playoffs, to be a good enough goaltender to backstop the Canucks on a deep playoff run.

Despite the never playing Colorado in the playoffs in 2002-03, the Avalanche became the benchmark against which the Canucks' measured their regular season success. And, in the final game of the season, they came up agonizingly short in multiple areas in comparison to their rivals.

Heading into their final game, against the sadsack Los Angeles Kings, the Canucks needed just a single point to capture the division crown. Meanwhile, Markus Naslund sat on the verge of history with an opportunity to capture the Canucks' first ever Art Ross and Rocket Richard Trophies. Naslund sat at 104 points (one ahead of the Avalanche's Peter Forsberg) and 48 goals (one behind the Avs' Milan hejduk). However, while the Canucks lost 2-0 on the final day of the season, the Avalanche won 5-2 against the St. Louis Blues in a game in which Forsberg and Hejduk each recorded three points. Naslund finished one point behind Forsberg in the Art Ross race and two goals behind Hejduk. Forsberg also earned the Hart Trophy; who knows whether voters would have been swayed more toward Naslund had he won the scoring race.

Despite losing out on the scoring race, Naslund was recognized by his peers as the league's MVP and captured the first Lester Pearson Trophy (now Ted Lindsay Award) in the franchise's history. This is a significant honour and one of which Naslund and the Canucks should be extremely proud. For their strong seasons, Naslund (48 goals, 104 points) and Todd Bertuzzi (46 goals, 97 points) both made the NHL's First All-Star Team. If you forget how good Naslund was, just take a gander at this beauty against the Ottawa Senators during the 2002-03 season:

While the West Coast Express was the team's engine, the Canucks were not a one line team. Daniel and Henrik Sedin were playing in their third NHL season, and on a second line alongside Trent Klatt, they racked up a respectable (if unspectacular) 31 and 39 points respectively. Meanwhile, Matt Cooke put up an impressive 42 points and the solid Trevor Linden added another 41. The defense featured Mattias Ohlund, Ed Jovanovski, Sami Salo (wow, he was on the Canucks for a long time!), and Brent Sopel (who put up a very impressive 37 points). This highlight package shows some of the amazing talent that was on this squad. Sit back and enjoy:

Wow. I forget sometimes how amazing the West Coast Express was. And how great was it to see Trevor Linden racking up the beauty goals?

After the disappointment of the final game of the season, captain Markus Naslund addressed the hometown crowd by surprisingly announcing that the team had "choked" and that they would do better in the playoffs. If anyone ever doubts that Naslund was an accountable, inspiring and standup captain, remind him or her of this moment (to say nothing of his frank assessments of the team's performance, including his own, in many postgame interviews). However, the team stumbled in its first round series, falling down 3-1 to the St. Louis Blues (including a brutal 6-0 loss in Game 1).

With their backs against the wall against the Blues, the Canucks clawed back and forced a seventh game on home ice. After falling down 1-0 early, some excellent forechecking by Trent Klatt and some early Sedinery brought the score even:

After netting two more goals, including on a wicked wrist shot from Naslund, the Canucks headed into the third period nursing a two goal lead but on the penalty kill. A Blues powerplay goal would have reshaped the complexion of the period and shifted momentum. However, less than 30 seconds into the period, former captain and all-time Canucks great Linden stole the puck from a fallen Doug Weight, raced in on a 2-on-1 break, and snapped a shot past blues goalie Chris Osgood, allowing the Canucks to confidently close out a 4-1 victory:

I remember watching this game at a downtown Toronto bar and screaming my head off when Linden scored that goal. Afterward, a handful of cars waving Canucks flags and honking their horns did a 1:00 AM flyby down the street, allowing me to share the moment with more Canucks fans despite being 4000km away from Vancouver. The victory celebration was made all the better by the fact that the hated Avalanche had blown a 3-1 series lead to the upstart Minnesota Wild, the team that the Canucks would face next. Colorado may have beaten us out for the division crown and the Art Ross, but dammit we were moving on to the second round and they were hitting the golf course! It was a sweet feeling that, unfortunately, lasted only a brief period.

Fans, myself included, were very confident going into the series against Minnesota. Get by the upstart Wild, and we were on to the conference finals - a feat the Canucks had not accomplished since the legendary 1994 Stanley Cup Final run. When the Canucks took a 3-1 lead, it seemed all but certain that they would move on to the third round. However, the tenacious Wild won the next two games in blowouts to send both teams to their second Game 7 of the playoffs. Game 7 started promisingly, as the Canucks built a 2-0 lead, only to completely unravel as the Wild stormed back to win the game 4-2. The shocked Canucks were done for the season after seeming so close to extending their season into the conference finals.

I was devastated by that loss to the Wild. It really felt as though the Canucks had an excellent shot at making the Stanley Cup Final if they won that game. Of course, that may not have happened - the Wild ran into the incredibly hot J.S. Giguere in the next round, and were swept in four games as the Ducks goaltender delivered a playoff performance that earned him the Conn Smythe Trophy in a losing effort to the New Jersey Devils. Giguere allowed just one goal (!) in the series against the Wild, and given such stellar play it debatable whether the Canucks could have knocked off the Ducks. Still, with the West Coast Express in peak form and a strong supporting cast, the Canucks certainly could have made it an interesting series. They then would have had to overcome the Devils, another stingy team with a great goaltender. So perhaps losing to the Wild only made the inevitable happen sooner. 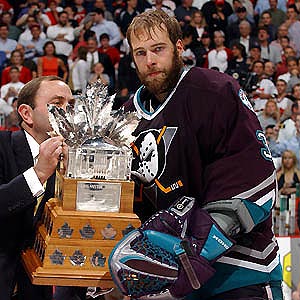 If they had beat the Wild, could the Canucks have overcome this man? (via www.legendsofhockey.net)

Ultimately, the 2002-03 season is yet another "what if?" season in Canucks history. It was the final time that the West Coast Express would play in the postseason, as it was the season prior to Bertuzzi's infamous attack on Steve Moore. It was also the final time that Dan Cloutier would be the go-to goalie in a Canucks playoff series (he was injured in the first round in 2004 and replaced by Alex Auld, and following the lockout and the 2005-06 season was traded to the Kings). Might Canucks fans remember Cloutier differently had the team been able to overcome the Wild and advance to the conference final?

While the core of the team returned intact in 2003-04 and finally wrested the Northwest Division title away from Colorado, the Bertuzzi suspension cast a pall over that year's team and they went down in the first round to the Calgary Flames in seven game series. The lockout cancellation of the 2004-05 season and the awful 2005-06 season, after which much of the team was dismantled, meant that 2002-03 represented the best opportunity for this very talented Canucks core to win a Stanley Cup. Unfortunately, the second round was as close as they would come. 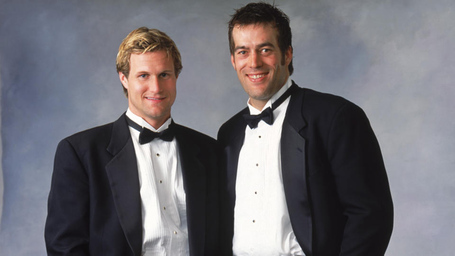 Nonetheless, there is much to reflect upon positively from the 2002-03 season. Many young players had excellent seasons, while veterans such as Linden and Klatt made clutch contributions in a supporting role. The team was entertaining to watch game in and game out. Even the much-maligned Cloutier recorded excellent numbers (33-21-6, 2.27 GAA). Most significantly, Markus Naslund was sublime and Todd Bertuzzi incredible. This season represented the two at the height of their powers together, and it was a treat to watch. Putting two players on the First All-Star Team is something the Canucks have only done one other time in franchise history, in 2010-11 when the Sedins accomplished the feat, and that alone makes this season remarkable. Unfortunately, despite these accomplishments, the end result was more of the same disappointment to which diehard Canucks fans have become so accustomed.