Repost: Videos: A Historic Look At The Canucks - Blackhawks Rivalry

Share All sharing options for: Repost: Videos: A Historic Look At The Canucks - Blackhawks Rivalry

It's crazy to think that the Canucks were in an eastern division prior to 1974. In that year the Smythe Division was formed and the teams named to that division were the Canucks, Kansas City Scouts, Minnesota North Stars, St. Louis Blues and Chicago Blackhawks. The Canucks and Blackhawks battled down to the wire to see who would claim top spot in that division in its inaugural season:

Now, I was way too young to follow hockey in those days, so I don't know how much of a rivalry there was between those two teams in that division until the Hawks moved to the Norris Division in 1980.

1982 was the first time Vancouver and Chicago met in the playoffs, and it was a war.

OK, I'm not sure that one was from the playoffs or not, but it's fun watching Tiger Williams kick a Hawks' ass like that.

Something historic happened in Game 2 as coach Roger Nielsen thought the Canucks were getting jobbed by the refs:

Game 5 was extra special for several reasons. Here's one reason:

But the biggest reason:

What a team that was. What a 5-game war that series was. Love it!

There was a large gap in time before these two teams would play each other in the playoffs again.

That would be 1995, where Chris Chelios puts the Canucks out of their misery in the 4th game, a year after Vancouver's insanely beautiful run to the Cup Finals in 1994. Chelios had scored the game winner in OT in Game 3 as well. Same kind of play: pinching in from the point and nobody covering him. Facepalm City:

I guess we can almost blame that jackass Dustin Byfuglien for really jump starting the rivalry. He decks Roberto Luongo after Lou stops him cold and the infamous brawl / hair-pulling incident occurs:

Soon after the two teams met in the playoffs.

No love in that series:

The Canucks, even with Mats Sundin, were clearly outclassed by the Chicago squad in 2009. What an insane Game 6 to end that series:

Not very exciting. But what was were Kesler's words about Ladd after the game (which the Canucks won 5-1 by the way):

For the second year in a row the Canucks and Blackhawks face off in round 2. Once again it went 6 games. However, this game 6 was ugly:

Dave Bolland is so funny that I want to punch him in the yap:

For the third consecutive year the two teams meet in the playoffs. This time in round 1.

Who could forget Raffi Torres clubbing Brent Seabrook the first game back after Raffi's suspension:

Back to suspension / thug life for Raffi.

The Canucks had a 3-0 series lead and blew it, as it went to game 7. Up 1-0 with just over a minute to go in the third (and me pounding the rum in fear) this happens:

You gotta be fucking kidding me. I lost faith at that point. Or, let's just say I had a bad feeling. So I pounded more rum. What followed is the greatest Canucks-Hawks moment of all time:

Suck it, Toews. Wooo! That goal trumps them all for this rivalry. What's that, Hawks fans? What? How about rubbing a little more salt into the wounds:

5 game suspension for Keith for that filth. Complete highlights of that game here:

This about all Keith got for that cheap hit on Dank: 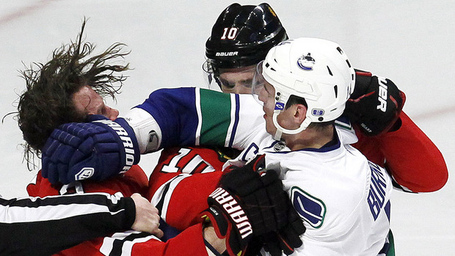 Maybe this will make you feel better:

There should still be enough bad blood to carry this rivalry for a while yet. However, there was nothing like those 3 consecutive playoff meetings to really jack this up. It's too bad the teams don't play each other more often in the regular season.

Hope you enjoyed the trip down memory lane.