#10 on the top Canucks season of all-time: 1988-89 After a mediocre season, the Canucks nearly upset the powerhouse Calgary Flames in an epic first round playoff series. The season was notable for the debut of Canucks legend Trevor Linden, who made the NHL All-Rookie Team as an 18 year-old. 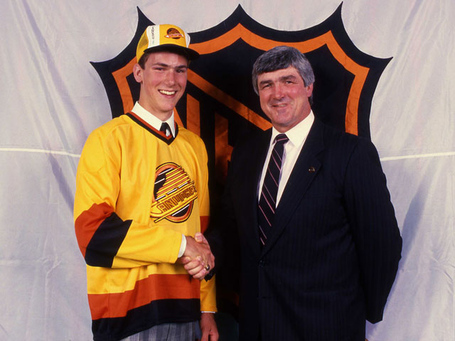 Over the coming weeks and months, I will be counting down the Top 10 Canucks seasons of all-time. The list is based on a combination of team success and the significance of the season to the Canucks' history. The list was arbitrarily made by me, so feel free to share your own thoughts and debate my selections in the comments section.

In the summer of 1988, the Canucks used the second overall pick in the entry draft to select Trevor Linden, the strapping centre from Medicine Hat, Alberta who would eventually become the face of the franchise. Linden's immediately made the jump to the NHL in 1988-89, where he had an immediate impact with 30 goals and 29 assists. Linden finished second in voting for the Calder Trophy and made the NHL's All-Rookie Team.

While the acquisition of Linden was significant to the team's fortunes in the future, the 1988-89 season was memorable also for an epic seven game series against the powerhouse Calgary Flames. The Flames won the President's Trophy that season with a whopping 117 points (remember, this is before OT loser points and shootouts) and were expected to easily dispatch the Canucks, who finished with 19 fewer wins and 43 fewer points than their division rivals.

The Canucks had been mediocre throughout the season, with the emergence of Linden as a force one of the only bright lights. The roster, though featuring Canucks legends such as Linden, Greg Adams (there were actually two Greg Adams on the roster!), Stan Smyl, Kirk Mclean, and Harold Snepsts, was fairly substandard. However, in their first round series, they pushed a far superior Flames squad to the brink - the game was decided in overtime of the seventh game.

In Game 6, trailing the series 3-2, the Canucks pulled out a 6-3 win on home ice to send the series back to Calgary for a deciding game - all while rocking their garish yellow home jerseys. The game featured a clutch and beautiful goal by the Canucks' prized rookie, who split two Flames superstars, Al MacInnis and Theoren Fleury, and snapped the puck past all-star goalie Mike Vernon to make the game 2-1:

Game 7 was played in Calgary, and ended tied 3-3 after regulation time. The Canucks had the opportunity for a monumental upset. For a brief second it appeared as though the Canucks would pull it off, when captain Stan Smyl burst in alone on Vernon:

Alas, the upset was not to be. Near the end of the first overtime, a puck sent to the net bounced off of Joel Otto's skate and past Kirk Mclean. The Flames celebrated and the Canucks hung their heads. But the team had much to be proud of, and showed a lot of mettle against a much stronger team. The Flames went on the win the Stanley Cup, losing just three more games along the way, having dispatched their surprisingly tough rivals in the first round. Many of the Canucks players, including Linden, Adams, and Mclean, would be central figures just a few years later on the strong Canucks squads of the early 1990s.