#9 on the top Canucks seasons of all-time: 2011-12. For most Canucks fans, players, and management, the 2011-12 season was a huge disappointment. Coming on the heels of an epic season, which ultimately ended in heartbreak in Game 7 of the Stanley Cup Finals, it was a "Stanley Cup or bust" mentality for the team and its increasingly restless fans. Despite the team falling well short of their goal, bowing out in a five game series against the Los Angeles Kings, the 2011-12 season nonetheless stands as one of the more successful in the history of the franchise.

Result: Lost in the first round to Los Angeles Kings (4-1)

For most Canucks fans, players, and management, the 2011-12 season was a huge disappointment. Coming on the heels of an epic season, which ultimately ended in heartbreak in Game 7 of the Stanley Cup Finals, it was a "Stanley Cup or bust" mentality for the team and its increasingly restless fans. Despite the team falling well short of their goal, bowing out in a five game series against the Los Angeles Kings, the 2011-12 season nonetheless stands as one of the more successful in the history of the Vancouver Canucks.

Despite some lackluster play at times, the Canucks took advantage of playing in an incredibly weak Northwest Division and captured the President's Trophy for the second consecutive year. It is worth noting that this was just the second time in the team's history that the Canucks topped the NHL standings; and that the Canucks became just the fifth team since the President's Trophy was inaugurated in 1985-86 to capture the award in back-to-back seasons.

And yes, I recognize that this accomplishment is meaningless to many hockey fans who see the Stanley Cup as the only benchmark of success. But when you have no championships to celebrate, you've got to hang your hat on something, right?

The season began on a sad note, with a pregame tribute to Rick Rypien. The team wore a helmet decal in Rypien's honour all season and also launched the Mind Check program to help tackle mental illness. The tribute before the opening match was incredibly moving and brought tears to the eyes of many fans:

After a rough start to the season, the Canucks hit their stride in November and cruised to the best record in the league. Although their team numbers remained excellent (fifth in goals for, fourth in goals against, fourth on the power play, sixth on the penalty kill), the offensive numbers of some key Canucks players slipped from their lofty heights of 2010-11. Henrik Sedin, the team's leading scorer dropped from 94 to 81 points; his brother Daniel finished with just 67 points, in a 72-game season cut short by injury, down from 104; and Ryan Kesler, who put up 41 goals and 32 assists and captured the Selke Trophy in 2010-11, endured a campaign in which he scored just 22 goals and 27 assists.

Entering the playoffs without Daniel Sedin, who missed the first three games against the Kings while still recovering from a concussion caused by a vicious Duncan Keith elbow, the Canucks struggled to generate offense against a stingy Kings team and a goaltender beginning a ridiculous run playoff run. While Daniel's return sparked a Game 4 victory, it was not enough to rescue the Canucks' chances and the Canucks dropped Game 5 to close out a disappointing season.

The playoffs were also notable as the likely end to the Roberto Luongo era in Vancouver. When Cory Schneider replaced Luongo as the starter for Game 4 Game 3 despite strong performances by Luongo in the first three games, it marked a changing of the guard. Well he has yet to be traded, most people assume that Luongo will be dealt before the NHL season starts after the lockout. He will leave Vancouver as the undisputed top goaltender the club has ever had. It remains to be seen what Schneider's legacy will be, but 2011-12 will be the season that seemingly launched him into the starting role.

Despite the tension around the goaltending situation, Luongo and Schneider remained on friendly and professional terms. One of the nicest symbolic moments of the season took place on December 6, a 6-0 shutout win for the team. Luongo left the game with an injury and Schneider filled in to preserve the shutout. The goaltenders were named co-third stars, and skated out together to salute the Rogers Arena crowd. As Nucks Misconduct's own Jordan Clarke wrote the following day, "After weeks of non-stop goalie talk, it was almost poetic to see both goalies play great and celebrate a shutout together": 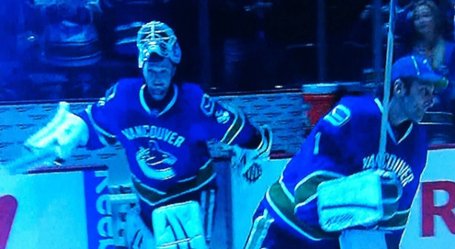 The highlight of the season for many fans too place on January 7, when the Canucks played the Boston Bruins. The Canuck were facing the team that eliminated them the in the previous Stanley Cup Finals - a series that featured no shortage of bad blood - and the game, which took place in Boston, was billed as a grudge match. IT certainly delivered on that count. After a wildly entertaining game, the Canucks won 4-3 on what will surely be remembered as the finest moment of Cody Hodgson's brief Canucks career:

Alas, the Bruins game was just another regular season game, and no trophies were handed out at its conclusion. But it was an emotional highlight in a season that teased fans with the possibility of excellence, yet ultimately left them disappointed after an untimely first round exit.