What a great weekend. On Friday I saw Rise of the Planet of the Apes, which ended up being a great movie. Then on Saturday morning, I got to watch the sequel. The animation on the primates wearing the black and yellow jerseys sure was lifelike! Are they really that violent in real life?

Kudos to the Canucks for coming out, playing a level-headed game, and answering a lot of critics. Even if you ignore all the pre-game hype and the post-game controversy, the Canucks beat a team with a record of 22-3-1 in the last two months, and scored four PowerPlay goals against the league's 7th best PK. It was an impressive accomplishment by any measure.

Zandberg did a great job of sifting through the aftermath of this game with his links post on the weekend. More fallout from the game, a very interesting "Today in Canucks History", and headlines from around the NHL coming right up!

Marchand's low-bridge on Salo was a cheapshot that has spawned much debate. Here are a few different takes on it: PITB looks at the events leading up to it, Canucks Army breaks down the difference between it and a legitimate hipcheck, and the Vancouver Sun's piece features this quote from Kevin Bieksa:

"It's very, very cheap...I can't think of a cheaper hit you can do on the ice. That and a slew-foot kind of go hand in hand. Twenty seconds before that, [Marchand] and Sami have a pretty good collision in the exact same spot. Sami probably gets the better of him. Then second time, Marchand comes back and loses his will and goes down low. A cheap shot from him, and I hope he gets a phone call from the league."

I'll also remind everyone that this isn't the first time Brad Marchand has low-bridged a Canuck. Hard to forget this:
If Daniel hadn't bounced right back up from that, it would have been talked about a lot more. Both of these hits by Marchand are chicken shit plays by a guy who would rather risk seriously injuring an opposing player than take the brunt of a legal bodycheck.
Here's a great clip from AV that touches on Salo's injury, Mike Duco's call-up, the health of David Booth and Aaron Rome, and the stupidity of Brad Marchand's defence of his hit: 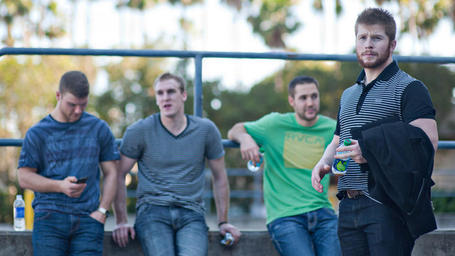 [From the latest Behind the Lens]
OK, I have to post the video of my favourite Canucks goal of the year so far. Probably not technically the prettiest — that one the Sedins scored that one time probably is — but it is my favourite. Enjoy the call from Jack Edwards:


Today in Canucks history: [Jan 9, 1987] Pat Quinn is suspended from coaching in the NHL by league president John Ziegler for accepting a $100,000 signing bonus from Vancouver to become the team's President and General Manager, while still under contract with the Los Angeles Kings. The suspension wasn't lifted until January of 1990. [The Inquirer]
NHL news & notes:


Today in NHL history: [Jan 9, 1985] The Flames set an NHL record with their 264th straight regular season game without being shutout. Not sure how many of those games they actually won, but who keeps that stat anyway?