Share All sharing options for: Chicago Wolves Weekly Update - WITH A SPECIAL GUEST! 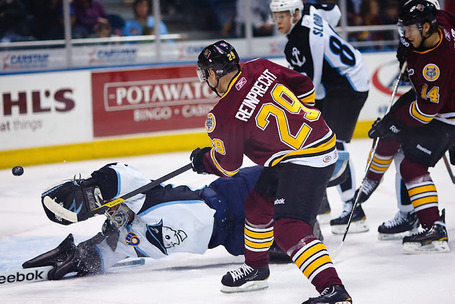 This past week was a busy, and successful one for the Chicago Wolves. They took the long way to Abbotsford, including a plane ride to Seattle, and a bus ride up north. As these were away games, i was unable to watch them, so i brought in a special guest who was at BOTH games in the flesh in order to provide you with a more in depth update, find out who after the jump....

.....Now that the suspense is over, the special guest is none other then THE STANCHION, your favorite blogger, please see the fun filled interview below....

Googlyboogly: How was it to watch mark MACHO MANcari act as a man amongst boys at the AHL level?
The Stanchion: MACHO MANcari was metaphorically dropping elbows from the top rope on the Heat all game long. The guy has a legit NHL shot and was hard to get off the puck. The AHL is a slower game so his skating was never really exposed, and as a result he pretty much did whatever he wanted out there. He also made some nice passes to go along with his laser shot. You can tell he has NHL offensive skills, it's just his skating that remains the question. Still, it was fun to see MANcari score 4 points in two games and take the first star in game 1.
Googlyboogly: Is there anything special in the water in Abbotsford that can explain what Steve Reinprecht did last week?
The Stanchion: Do they put cocaine or speed in the water out there? I don't know what it was, but Rhino was dominant out there. Though give credit where credit is due, Steve was going to the tough areas and using his veteran smarts to be in the right place at the right time. He took a beating in front of the net but he held his ground and as a result got 4 goals in two games. You never know what might happen come playoff time when the cap no longer matters, so Reinprecht might be making a case for an injury call up if anything happens.
Googlyboogly: What was your general feel of the team across both victories?
The Stanchion: The Wolves look terrific, especially in transition. Anytime the Heat made a turnover, the speed of the Wolves was very noticeable, as was there puck control. For their part, the Heat looked like they were in a coma. They offered little to no resistance much of the night. As a result, every single Wolve player looked like a budding NHL superstar. It had me convinced Nolan Baumgartner was being mis-used by the Canuck organization as he looked like a stud against the Heat. Again, not to take away from Chicago as they played really well, but the Heat were god awful in both games. I think Eddie Lack fell asleep at one point during game two.
Googlyboogly: What did you think of the Eddie Lack/Matt Climie tandem?

The Stanchion: I am a huge Lack fan, but I came away more impressed with Climie. Now again, that is probably because Climie had a tougher game than Lack (Seriously, I think Lack stopped two shots in his game), but Climie tracks the puck really well through traffic and is a more mobile goalie than I thought. And in true Canuck fashion, he is not that good at handling the puck. Lack had almost no hard shots, so it looked like a warm up for him.
Googlyboogly: Who amongst non-canuck prospects impressed you the most?
The Stanchion: The one player on the Heat who stood out for me was #34 Carter Bancks. Aside from having a wicked tag line all lined up "You can take THAT to the Bancks!", he was also the one guy who tried to play a physical game and tried to get under players skins all night. Played hard and was the only reason the first game ended up being close.
Googlyboogly:Which player on the Wolves do you think could make the biggest impact at the NHL level right now?
The Stanchion: Chris Tanev is the easiest choice. Though surprisingly he didn't stand out during the two games I watched. The playesr who stood out were Baumgartner, Rhino and Mancari. But again, if you are looking for someone to make a legitimate NHL impact that could handle the size and speed of the NHL game, I would say Tanev, and maybe surprisingly to some, Billy Sweatt. I thought he played really well and used his speed wisely. Dark horse shoutout goes to Rhino for a playoff call up though.
Googlyboogly:Who do you feel is the best overall prospect currently on the Wolves
The Stanchion: Chris Tanev. Though I am interested to see how Connaughton does. He played effective minutes and I am looking forward to him develop.
Googlyboogly: Who was the best Mancari on the ice for both games?
The Stanchion: Mark Mancari
Googlyboogly: Who had the best Mancari goal of the two games?
The Stanchion: Mark Mancari
Googlyboogly: Who scared the opponents so much that they filed an injunction with the league to no longer allow him to play against them?
The Stanchion: Steve Reinprecht . (Sorry, he one upped Mancari. It pains me to admit it, but it's true.)
Googlyboogly: Funniest moment of your time watching the team?
The Stanchion: As the Wolves bus is pulling away after game two to head to Seattle, Mike Duco takes off his shirt on the bus. Girls began screaming. I think one may have fainted.
Big thank you to the stanchion for taking the time to answer a few questions about the Wolves.
After the Wolves beat the Heat twice, they flew directly to Milwaukee to take on the Admirals in another big game, and despite a grueling travel schedule managed to come away victorious with a 2-1 victory.
ALL STAR GAME: Darren Haydar and Kevin Connauton were the Wolves selected to this year's AHL all star game. Haydar was elected captain of the western conference team by the AHL. The West won the game in a shootout with Haydar and Connauton each scoring a goal, but the big story came in the skills competition with Kevin Connauton winning with a 99.4mph bomb. Congrats to both for representing the Wolves well.
Follow me on twitter @ggooglyboogly to learn more about your canuck prospects