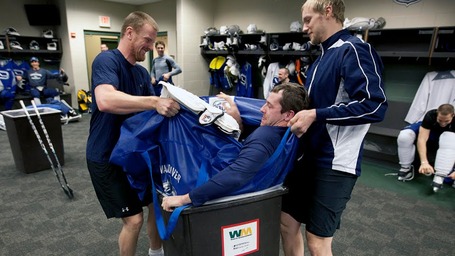 (Poor Ballard. Not even the Swedes want him.)

The NHL Trade Deadline is February 27, but as you know several trades happen days and even weeks before that date. So I figured I would post this now and as this is a FanPost, please "rec" it to keep it on top of the FanPost section on the right sidebar of the main page for the month of February. That way it will be easier to see and access.

I will buy a nice warm Canucks hoody for anyone who guesses a trade correctly. If a tie occurs, the person who has commented on this site the most will be awarded the prize. If you guess Mike Gillis does nothing and Mike Gillis actually does nothing.....you get nothing. A trade must occur.

Rosterbation, which we more or less define as (most of the time unrealistically) creating a dream Canucks team via trade or signing to make it the best experience possible, has been rampant already all over the League via mainstream media, blogs, Twitter, Forums, etc. What I am trying to do with this thread is to provide a hub for that kind of conversation for our NM Community, commenters and lurkers alike. A place for you to voice your opinion on what you'd like to see Mike Gillis do. But first, I am going to provide a bunch of information and get the conversation going. Lots after the jump.

Maximum Cap Hit: Check this out. Mom, why did you drop me on my head as a kid? Oh well, back to my glass of antifreeze.

Most of the chatter from the media and fans is about whether or not Mike Gillis will move Cory Schneider and / or Keith Ballard. Schneider becomes a restricted free agent after this season and is going to command dollars that the Canucks won't be able to afford without suffering somewhere else in the lineup. Schneider is a starting goaltender now. Teams will be chasing him before February 27. Mike Gillis seems content to ride a 2-tier goaltending tandem into the playoffs and I don't blame him. But he has said he would pull the trigger on a trade if someone basically blows his mind with an offer he can't refuse. Ballard and his $4,250,000 salary is an easy person to target for trade rumors because he cannot crack the top 4 and is benched often. It's not a ringing endorsement to other teams when a player with that salary is getting benched, unless they see a huge amount of potential. Gillis would probably have to sweeten the pot considerably to offload him. Ballard has 3 more years left on his contract after this season.

Lots of talk about Canucks needing to acquire size up front, especially in the top 6. In my opinion they got that already in David Booth. That was the top 6 guy that they were hunting for all those months. So, with all the 9-12 forwards Vancouver has in its system, the only "void" or possible upgrade I can see up front is on Line 3: A versatile guy with a low salary who can play defensively and score and challenge for a top 6 spot or fill it if injuries occur. Currently, Mason Raymond, Cody Hodgson and Jannik Hansen occupy that spot. I believe Hodgson and Hansen are not going anywhere. Raymond...huh. Well he becomes a restricted free agent this summer. I wouldn't mind seeing a bigger body replace MayRay. But he would have to score at a .50 points per game pace like MayRay does. Having said this, I wouldn't care if Gillis leaves the forwards alone.

Given Sami Salo's unfortunate injury history, it's fair to say that he's most likely going to get injured again, especially come playoff time when the game intensifies and his body pays for it. When Salo is out, a gaping hole is left both offensively and defensively in his absence. Offensively on the power play and defensively 5 on 5 and shorthanded. I suppose Ballard was supposed to be that guy to jump in but that now seems unlikely to occur...ever. Salo is currently irreplaceable with the current depth. I believe that this is the most glaring need for the Canucks at this point. In a perfect world we trade Ballard and acquire another $4 million top 4 defenceman with a right-handed shot. Just my opinion. OR, Ballard plays superb and stays. The 5th and 6th spots on D are covered with Rome, Alberts, Sulzer and Tanev. Tanev is a right handed shot but I'm not sure the team is willing to go with him in the top 4 unless they have to.

If you think Roberto Luongo is getting traded you are in the wrong place. If you want Roberto Luongo traded we will entertain your opinion. The only potential trade here is Cory Schneider, and like I said earlier: the interested team is going to have to blow Mike Gillis' mind with an offer. I hope he stays and I almost expect that to happen. I think he pushes Luongo to be better because at any time Alain Vigneault will go with Schneider if Lou falters.

THE ROSTERBATOR IN ME WANTS:

The risky route: Keith Ballard and Mason Raymond traded to the Canadiens for P.K. Subban and Travis Moen.

Less risky: Keith Ballard and a 3rd round pick traded to the Penguins for Matt Niskanen. Yes that puts the Pens over the cap and no I don't care.

CapGeek has you covered.

OK, check this bad boy out. You can punch in trades and the machine will calculate cap space for you!

TSN's Tradecenter Page, Spector's Hockey (recommended, big time), Sports Overdose, The Hockey News Rumor Roundup, ESPN Rumor Central, Bruce Garrioch.....just kidding. Trust me, Lyle Richardson at Spector's Hockey is my fave and keeps you up to date on what's going on with rumors. And if a rumor is horse manure, Richardson calls it. He is a very wise man.

Alright, it's your turn to voice your opinion. You can be as realistic or unrealistic as you like. Please keep the conversation civil. Not everybody is going to agree with eachother's proposals / ideas.

What is the biggest thing you want Mike Gillis to accomplish before the Trade Deadline?