If I had limitless time, I would go back and compile a video of all of Dan Hamhuis' (sorry, Han Damhuis') best breakout passes from this season. He's the best on the blueline at it. He's such a smooth skater, and always has his head up in his own zone. We saw it on Cody Hodgson's now-classic goal against Tim Thomas, and we saw it on David Booth's goal last night:

What a thing of beauty. News and links after the jump.

The Canucks have helped develop a new website called Mindcheck.ca, to raise awareness for anyone fighting mental illness. I can't think of a better way to honour Rick Rypien than to reach out to those who might be suffering from the same illness. [Canucks.com]

More on Mindcheck, from Canucks Army, The White Towel, and the Humming Giraffe.

Cory Schneider was asked about the Tim Thomas situation, and he gave his opinion. The simple mindedness of the media in situations like this irks me. "Hey wait a minute, you're a goalie! And you're American! And you're from BOSTON! You must have an opinion!" [Vancouver Sun]

"Obviously he believes strongly in his political views," Schneider continued. "But, as an American, I think we all have a little bit of respect for the position of the president. Whether you like the guy or not, he's the president of the United States. Tim has made a great living and a great career in the United States and I'm sure he's benefited from tax-paying dollars and every other right that as an American citizen we all enjoy.

"It's a little bit of a slight to sort of forget all that and choose to do this."

Since Hodgson's big game on Saturday, talk about whether or not he should be in the running for the Calder Trophy has heated up. Is he worthy? [Canucks Army]

Cam Charron studies to Cody's minutes to find his "sweet spot". I dare you to try and argue with this. [Legion of Blog]

Is this Sami Salo's last season? I don't think any of us would be surprised if it was. One thing's for sure: there's going to be a sizeable hole in the lineup and the leadership core when he does hang them up. As Burrows said, "We love him so much." [PITB]

A great example of the little things the Canucks organization do to try and gain an advantage: the players were wearing heart monitor's during Tuesday's practise to test their alertness. [Vancouver Sun]

It's Snub Week in the NHL. Alex Ovechkin is opting out of the All-Star Game because he doesn't want to be a "distraction" while serving his suspension. In other words, he thinks the suspension is BS and this is his way of telling the league to go stuff it. Here's Nick Kypreos' take on the situation (why not?) [Sportsnet]

Here's the video of the Ovechkin interview, courtesy of Kukla's Korner.

Ovechkin remains unsuspended from giving teammates pies to the face:

I think the NHL should capitalize on an opportunity here and make Snub Week an annual thing the week prior to the ASG. It would be sponsored by Mr. Sub, with an appearance from Mr. Snrub.

With AO sitting out, James Neal gets the call! Should have been there all along. [PHT]

With Jonathan Toews' injury, Scott Hartnell will step up to replace him. I love this pick, Hartnell has a lot more potential to do something entertaining than Captain Serious over there in Chicago. [Sporting News]

Toronto's Drake will perform at the All-Star Game this weekend. Surprised the NHL managed to land a legitimately popular name in music. Wasn't it 3 Doors Down last year? [CBC]

Bruce Arthur with an inside look at the Boston Bruins' visit to the White House. This is pretty good. [National Post]

Here are Elliotte Friedman's 30 Thoughts for the week. [CBC]

In his piece Friedman links to a good article on Bobby Holik's new hockey site, Holik on Hockey. Here he talks about PK Subban:

It is a lot of the same type of people who showed me absolutely no respect when I came to the league in 1990 freshly "off the boat" from eastern Europe. They demand you play and behave what they consider is right and respectful. These people developed a "carbon copy mold" for the "proper" NHL player. I had to battle through it and prove them you can be successful playing a style they don't like and have a fairly good career.

Watch as a hockey rink roof collapses moments after its participants leave the ice. On the ice before the disaster was Richard Zednik and a bunch of young kids. This clearly could have been a lot worse. [Puck Daddy]

Brian Elliott just skyrocketed up my list of favourite NHL goaltenders, because he has Casey Jones from Teenage Mutant Ninja Turtles on his mask. [In Goal] 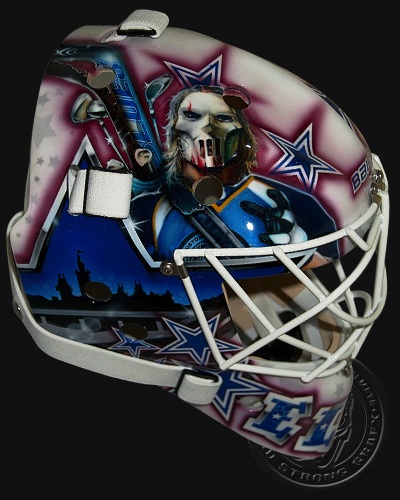