The Canucks host the 29th-place Edmonton Oilers tonight at Rogers Arena, in the last game before the All-Star break. They'll be fully healthy for the first time in ages, as Sami Salo is returning from his concussion (at least, that's the word at the moment, don't screw me over scheduled blog post!). The Canucks will have a full compliment of forwards and defencemen to roll out against the Oilers, who beat the the Sharks in a shootout last night, while being outshot 45-18 in the game.

Get set for the last meaningful game in a week with some sweet links. Yeah, and there's a bit of NHL news to pass along as well. Timmay!

Sami Salo will be back in the lineup tonight when the Canucks take on the Oilers. Chris Tanev has been sent back to the Chicago Wolves. [The Province]

Ben Kuzma with some good stuff on Keith Ballard and Chris Higgins. Ballard is turning into quite the little agitator as the #5 defenceman. He's been backing it up with his fists lately, and has been playing more consistently. [The Province]

The Stanchion puts on a wrap on the Canucks SuperSkills competition. [Legion of Blog]

Should Cody Hodgson be on the 1st PowerPlay unit? [PITB]

It's an interesting idea, but I disagree with it for a couple reasons: Daniel Wagner advocates replacing Salo on the point with Hodgson, and I think he's most effective on the left side down low, where he can use his vision and shot in close; and it cripple the second unit. The Canucks have plenty of talent available for that unit, but no one who can run things the way Hodgson or Henrik does. I wrote a post Sunday on the positive ripple effect CoHo has had throughout the lineup, and one of the points was he gives the Canucks a legit second option on the PP if the top unit is shutdown in the playoffs again. Yep, shameless plug right here! [Game 7 Hockey]

A Sharks fan, of all people, makes the case that Mason Raymond should not be traded in favour of less skill but more toughness. Spot on. [Shark Circle]

...watching a fast and skilled Vancouver Canucks team lose to the ever-physical Boston Bruins might make a Canucks fan become obsessed with size and grit, while forgetting the value of speed and skill, two assets paramount to the Canucks reaching the Final in the first place.

[Jan 24, 1976] Chris Oddleifson becomes first Canuck to tally two shorthanded goals in one game, scoring twice in the second period versus Toronto in a 5-5 tie.

[Jan 24, 1999] Mattias Ohlund and Markus Naslund played for the World All-Stars in the 1999 NHL All-Star Game in Tampa, Florida. Ohlund recorded a goal and an assist while Naslund added an assist. The North American All-Stars won the game 8-6 with Wayne Gretzky named MVP.

Did you hear? Yesterday, the Boston Bruins were honoured for their Stanley Cup win by US President Barack Obama.

But wait, their best player and MVP from the playoffs was missing! What happened? Was he stuck on the side of the road with a flat tire, frantically calling Roberto Luongo for a spare? No. It turns out that living behind Tim Thomas' affable, teddy bear-like demeanor is a bit of a political headcase. He explains, on Facebook of all places:

I believe the Federal government has grown out of control, threatening the Rights, Liberties, and Property of the People.

This is being done at the Executive, Legislative, and Judicial level. This is in direct opposition to the Constitution and the Founding Fathers vision for the Federal government.

I can see where Thomas is coming from. Personally, I know I have never shaken hands with anyone that I didn't agree 100% with about everything. [ProHockeyTalk]

Present at the White House event was US Senator John Kerry, who oddly enough recently broke his nose playing hockey. That's the official story, anyway, but my sources tell me that instead of shaking his hand, Brad Marchand gave Kerry six gloved punches to the face upon meeting him, completely unprovoked. [CBS Boston]

Alex Ovechkin just dropped 4.2M on a house in Virginia's Fairfax County. Check out the staircase, it spirals downward almost as drastically as Ovie's point totals over the last few seasons. [PHT] 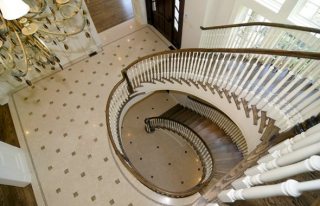 Ovechkin will have some extra time to get settled into his new digs, as he has been suspended 3 games for his leaping headshot on Sunday. [CBC]

Zbynek Michalek, the victim of Ovie's hit, and the culprit in a questionable hit of his own, escaped the Shanahammer unscathed. [Puck Daddy]

Jonathan Toews will miss tonight's game against Nashville with an upper-body injury. He may miss the All-Star Game festivities this weekend as well. He should be OK for the big game against Vancouver on the 31st. [TSN]

In ASG news, Jordan Eberle and Kris Letang have been added to the roster, replacing injured players Mikko Koivu and Dustin Byfuglien. This effectively destroys the dream of Dany Heatley playing in an ASG in Ottawa. [Sportsnet]

Wow, the Devils are in some seriously deep shit. [The Fourth Period]