I gotta say, a struggling Canucks team like the one we've been watching lately is great for morning news blogs! With only four games in the latter half of January, if the team was ticking along like they were in December, I'd have nothing to show you. I'd probably resort to giving you daily updates on Cody Hodgson's diet ("He's eating quinoa again!"). My point is, maybe this little slump isn't the worst thing in the world. Every cloud!

Chris Tanev speaks to the media. It appears he subscribes to the rookie interview playbook that says if you're ever stuck for words, just say "work hard".

When Tanev was brought in last year, no one knew what to expect, and was thus pleasantly surprised by his solid play. Now there's a precedent of success, and the team, fans, and management are expecting a lot out of him. [PITB]

The Canucks annual Dice & Ice benefit was last night, which raises money for the Canucks For Kids Fund. Derek Jory shares some behind-the-scenes shots from the promo shoot. [Fort Nucks]

If you don't mind doing some scrolling, The Stanchion was there last night and posted a bunch of pics to his Twitter.

Sharks/Canucks isn't until tomorrow, but NW Sports Beat already has their preview up.

With Zdeno Chara captaining one of the All-Star teams, there's bound to be some more Canucks/Bruins controversy spun from what should be a harmless game. Harrison Mooney runs through the scenarios, which includes this gem: [PITB]

Scenario no. 7: Chara selects Daniel, who clocks Henrik with a folding chair and immediately tears off his jersey to reveal Bruins colours.

On the topic of struggles, the Sedins are in the midst of as big a slump as you're likely to see out of them these days. They have a combined 6 points in the last 5 games. As they do, though, they're owning up to it and know what they need to do. [The Province]

Oh hey, the second line is struggling too. Man this post is a downer today. [The Province]

Taylor Hall is going to be sporting one badass scar for the rest of his career. This is a scar on-par with Omar Little. The terrifying thing is, a few inches this way or that and Hall's career could have been over, or worse. [Oilers Twitter] 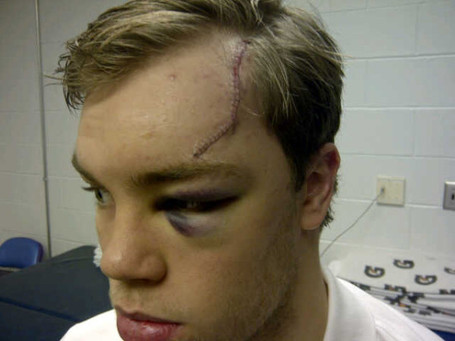 In the wake of the incident, Hall's mom has laid down the law and he will be wearing a helmet in warm-up from now on. [Montreal Gazette]

The Avalanche have already implemented a mandatory helmet rule as team policy. [Sportsnet]

Final word on Hall: he's hoping to play Saturday night, as he has suffered no post-concussion symptoms. Can't question the kid's toughness. [TSN]

Kris Letang returned to the Pittsburgh lineup last night and had an assist in 24:17 TOI, the most of any Pen. Everyone talks about the absence of Crosby, but Letang isn't far behind in importance to that team. Look at these stats. [Kukla's Korner]

By all accounts, Jaromir Jagr is having a great time in Philly, and all signs are pointing to him signing there for at least another season. [ProHockeyTalk]

Using stats-based analysis, a few teams are likely headed for second half slumps, and the league's current number one team tops the list. [Hockey Prospectus]

The Backhand Shelf presents the best goals, hits and saves from the past week.

Speaking of backhand shelf, Evgeni Malkin put this one right where his dad used to hide the vodka:

Todd Bertuzzi had a sweet spin-o-rama shootout winner last night. This is nicer than you usually see on that move, as he puts it — you guessed it — backhand shelf. This also qualifies as the most unenthusiastic play-by-play call in shootout history.

In another attempt from that shootout, Mike Smith actually stopped that ridiculous Datsyukian deke:

[Jan 20, 1995] The NHL season opened with the teams playing a 48-game schedule instead of the usual 84. The season had been shortened due to a players strike.