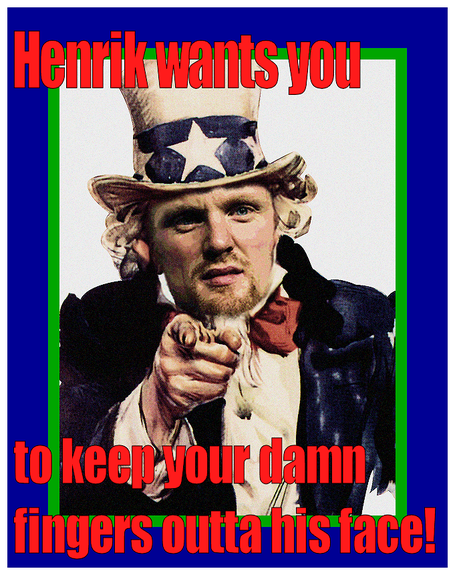 Thanks as always to MrsWaachcast for the photoshop wizardry.

Hockey always finds a way to come up with new things, but a delay to avoid potential sunshine is definitely one no one saw coming. That's why they pushed the start time back to 3pm EST in Philly for today's Winter Classic matchup against the Rangers. The Canucks meanwhile are back in action after their California road trip, playing their 5th game in 8 nights. To make matters worse, they're playing a Sharks team who haven't played since the Canucks beat them in OT on the 28th. A hellish bit of scheduling for sure. One good thing, is that Chris Higgins is ready to go tonight and a set of fresh legs will be welcome indeed. The Canucks are going to need another solid effort from all hands, especially the NHL's scoring leader Henrik Sedin. Hank, who was named 3rd star of the month in the NHL over the weekend, has got a bit tired of all the toughness questions, especially after what Joe Thornton did the other night (we already had a 'Fingergate' so I am gonna call this 'Jackassgate'), and I predict you see an evening of Wizardous Sedinery as they show the Sharks why you shouldn't poke the Swedes.

I wasn't able to watch more than the first few minutes of the game in LA, but reading different accounts of it, if you were surprised that the Kings played the game like that, you must be new to following the Canucks. That game seems to have been a combination of the Kings style over the last few years (remember there was a lot of this nonsense from them when the Canucks played them in the playoffs a couple years ago), and the requisite Drew Doughty dives. It's also got Darryl Sutter's Calgary-ish fingerprints all over it. It would have been nice to see more push back than there was, but it being the 3rd game in 4 nights on the road, and the Canucks' record in December, quite honestly they get a pass from me on this game. Payback will come for the Kings. There are bigger fish to fry.

The Sharks seem to be learning from past mistakes in not trashing the Canucks in the media leading up to tonight's game. Logan Couture spoke of focusing on getting the two points, and not who they're playing. He also pointed out that the Sharks were sitting out of a playoff spot currently, but the Sharks shouldn't really panic about this right now: there's still a fairly significant logjam thanks to NHL 'parity' and the Sharks have games in hand on everyone. So while it's hardly time to freak out for them, these losses will begin to take their toll.

Alain Vigneault did something he doesn't do often after the game Saturday night: he named names. AV was critical of 4th liners Maxim Lapierre, Dale Weise, and dman Andrew Alberts for their lack of response to the Kings taking cheap shots at Canucks players. The Canucks have gotten better in this department, but just like any other part of their game, they cannot take a night off in this department. Alberts or Weise especially should be mindful of the fact that their roles on this team could easily be filled by others, especially the close the Canucks get to the trade deadline. Heading into Saturday's game against Boston, showing this team isn't ready to compete is hardly the message they want to be sending.

Roberto Luongo gets the start tonight for Vancouver. He was solid against the Sharks, holding the fort to allow them to get to OT and making a number of big saves in that game. It really seems like the loss Saturday was more of a case his defence leaving him hung out to dry than a bad game on his part. Antti Niemi will get the start for San Jose, looking to do something he hasn't done much of since coming to the Sharks: Beat the Canucks.

The Winter Classic is kind of hokey hockey when you think about it. It's a gimmick designed to try and build the game in the US by presenting it in a format that belies it's true nature. It's also designed to be a cash cow for the teams involved through merchandise sales, and especially for the home team, ridiculously inflated ticket prices. I still end up watching it, more for the curiosity of it all than anything else. I am rather disappointed in the Flyers deciding not to start Ilya Bryzgalov today. He's become a media sensation thanks to the 24/7 cameras, and instead of this game becoming his magnum opus for the show, instead we get treated to Sergei Bobrovsky rather than Bryzgalov, who is becoming just another name on the Flyers' goalie graveyard roll call.

It's also terrible that the two players people anticipated seeing when the game was announced are not playing: Chris Pronger and Sean Avery. Pronger's been out for weeks with concussion-like symptoms, while Avery has been plagued with a big case of the suck and as such cleared waivers and was sent to the AHL, possibly for the remainder of his career. That's not to say there's no chance for mayhem in this game, after all it is still the Flyers and Rangers. You do get the feeling that the NHL is nervous as hell that there's not another Crosby-like incident in this game that sees a star player suffer a concussion in their spotlight game. Here's to Marc Staal getting through this game unscathed, as he was cleared to play and it was just announced he will play for the Rangers tonight.

The thing that bothers me the most about the Winter Classic is the unwarranted hype. I get what they're trying to do, I really do. But it's fairly obvious, at least to fans of the game, that they're trying to sell us a Picasso when we know it's a paint-by-numbers job. I heard it was called "hockey's answer to the Superbowl" this weekend, which is pretty offensive if you're a hockey fan or a football fan. The game isn't that important to hockey fans overall, and that seems like a slight to the game of football. Either way, I will not be surprised if we see a fight-less game that goes to a shootout, as per the script given to them at the start of the ye... I mean, who knows what will happen? By the way, Puck Daddy has a Winter Classic drinking game, but lord knows you wouldn't need alcohol to get through this game, right?

The World Junior Hockey Championships Quarter Finals are on today, with Finland facing Slovakia and the Czech Republic getting the Russians in a battle to see who takes on Team Canada in the Semi Finals. The Semi Finals games go on Tuesday, and should things go well, we will watch them battle for Gold on Thursday night.

From the desert plains of Tempe, Arizona come this thrash metal act with an appreciation for progressive influences and a science fiction-themed lyrical bent. They recently released their 3rd album 'Outer Isolation', and it comes highly recommended to me by my buddy Kyle who runs the excellent Antivenin blog. As you can tell by their logo, this is a band hugely influenced by Canada's own Voivod, and they definitely do them proud without being anything close to a ripoff.