It's a snow day here in Victoria, with all the schools and many businesses closing shop. If you're one of the lucky few who gets to stay indoors, why not grab a fresh Canadiano (or whichever caffeinated beverage you prefer in the morning) and settle in with some links?

Nucks Misconduct got a quote in Puck Daddy yesterday, in the piece about Ryan Kesler. Check it:

It was called an "overblown media mess" and "much ado about nothing" in the Vancouver Province. Nucks Misconduct joked "Clearly Coach V has lost the room! No seriously, Rogers Arena is very big and sometimes he gets turned around." Legion of Blog turned it into a Top Gun parody.

Someone placed a bottle of Aunt Jemima behind Dustin Penner on the Kings bench last night. Awesome. [Twitter] 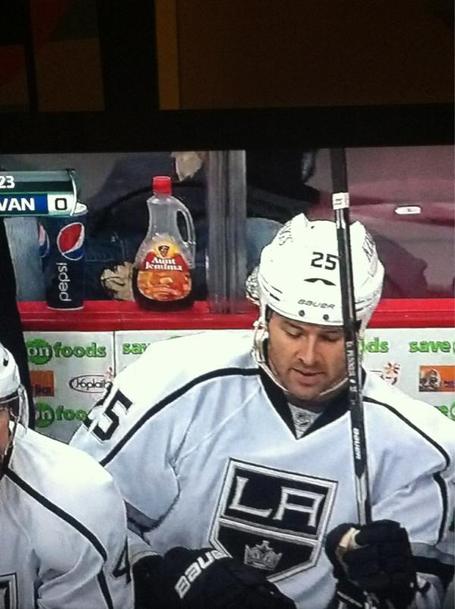 David Booth scored in his second game back on a beauty pass from the Honey Badger. And hey, Mike Richards didn't end his season with a vicious headshot. Bonus!

(Notice the sweet little pick play by Hodgson on Mitchell to free up space for Hansen.)

Three quick thoughts from the game last night. [Head to the Net]

Well, we know there's one opposition player on a rival that has nothing but respect for the Sedins. Thanks, Willie! Interesting bit on the 2003 playoffs, especially since the twins have been oft-criticized for their past playoff performances. [The White Towel]

A bike shop based in Surrey is designed a Canucks-themed motorcycle in an effort to win the 2012 Vancouver Motorcycle Show. [Canucks Army]

Taylor Hall's face was cut in a freak collision with teammates during warm-up. He received 30 stitches but it sounds like he's doing well.

Kris Letang has been cleared to play after his concussion and is hoping to return before the All-Star Game. [CBC]

Martin Brodeur is considering the possibility of coming back for one more season after his contract expires next summer. [TSN]

To the chagrin of John Tortorella, Rangers owner James Dolan grabbed the mic last night and announced that he believes his team is "pretty close" to winning its first Stanley Cup since...that one year a while ago. [ProHockeyTalk]

Ryan Miller hasn't been himself since the Milan Lucic hit. In fact, doesn't it feel like he's been just a tiny bit whiny since? He was rightfully choked about being run over, but with last night's rant to the media, he's on a bit of an indignant streak. [The Hockey Writers]

Speaking of goalies unraveling, Ilya Bryzgalov has been downright brutal since his star turn on HBO's 24/7 series. Look at his stats before and after the infamous "universe" speech. [Puck Daddy]

Cam Cole wonders if Sidney Crosby's clock is ticking. [National Post] The stress some in the hockey world are carrying about whether or not Crosby will ever be dominant and healthy again is almost palpable.

Patrice Bergon, Crosby's good friend and the one player who has managed to turn his career around after a string of devastating concussions, is having an All-Star worthy season. [CSNNE.com]

The NHL All-Star Game has lost a bit of its luster over the years. Here are 10 ways to improve it. [Puck Puck Goose]

Today in NHL History: Willie O'Ree became the first black player in NHL history, suiting up for the Boston Bruins in a game against the Montreal Canadiens. The story.