Canuck Brunch- We Need To Have A Talk

Share All sharing options for: Canuck Brunch- We Need To Have A Talk 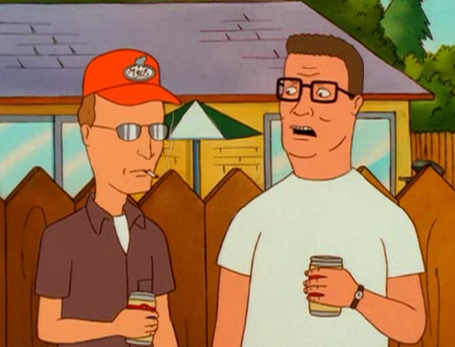 Dammit, Dale! If you say 'Trade Kesler' one more time, I am gonna kick your ass!

It's been a while since we chatted. It was earlier this year, I believe. Something about goaltenders? My memory of it is a little fuzzy, so you'll have to forgive me. I'm not very happy with you. After all the hard work that myself and many others have done to try and help with this issue, you've ignored it once again. On one hand, I can't really get too mad at you. It's hard not to trust them. They know just what to say to you, just how to get this kind of reaction. You have to see it from my point of view though. We really work hard to help you see when you should be concerned and when you shouldn't. Our intentions are honest. We just want to bring you things the way we see them. And while we may not be 'insiders' per se, we do pride ourselves on being knowledgeable, especially when it comes to these situations. And we know who to take seriously and who not to. Okay, I am just going to come out and say it. If you are one of the people currently engaged in bashing Ryan Kesler over a deliberate manipulation of sound bites, you're a really, really stupid fan.

Yeah, that's pretty mean. But I have bitten my tongue so much over the last couple years, and I refuse to do it any longer. This is a non-issue. Period. You're seriously going to turn your back on the guy you all clamored to have as Captain before the start of last season? The one so many of you feel has the 'Heart Of A Canuck'? It's bad enough that people actually chose to ignore nearly every media member who said this back and forth between Kesler and AV was nonsense. But you embarrass us as fans when you start calling Team 1040 and pining for him to be traded. Attacking his offensive output. Questioning his loyalty.

And this is not just the fans, mind you. There are media members out there who should know better than this. They seriously expect us to believe this? The whole 'goalie controversy' was garbage. We knew that, and said it all along, and what do you know. Everything we said turned out to be true. Look, it's not like we don't understand expectations are high in Canuckland. This is a team that many believe can make their way back to the Stanley Cup Finals. And despite some hiccups, this team has once again played like a contender. They've endured injuries, wonky scheduling, and even a couple trades. And there they are, atop the Northwest Division and contending for 1st overall. Is everything perfect? Hell no. There are things about this team that need to be improved. But the histrionics coming from the mouths of some of you suggest this team is a step away from the kind of rebuild that teams like Calgary and Anaheim are desperately in need of.

Here it is, in plain, simple English. There is no issue in the room. Alain Vigneault and Ryan Kesler are not at each other's throats. AV has not lost the room. There are bigger issues with this team than some manufactured pissing match. Stop, and think. Even if it was the way it looked, I would rather see Pissed Off Ryan Kesler. You know why? Pissed Off Ryan Kesler is a dominant force. He makes teams look bad. So if Kes has a lil fire underneath him, this is not the time to start admonishing him and calling for him to be shipped out. There is no Cup run without Ryan Kesler. So what if Kesler isn't going to score 40 goals this year? He's come back from off-season surgery, played with a constantly rotating line of wingers and the Canucks are still successful. Is he playing his best hockey right now? No, but he's still an effective 2 way player. You can't start bitching and moaning to trade someone the moment they struggle.

This whole thing couldn't have come at a better time, honestly. The last time the Canucks played the Los Angeles Kings was a pretty ugly thing. And the Kings, well, they were kind of dicks. The Canucks, in response played like they left the bus for the airport running, like they couldn't wait to get out of there and home before midnight. Sure, the LA Kings have played well since Darryl Sutter took over as coach, surprisingly well even. They were picked as a team to be feared before the season started, and look to be living up to that hype finally. But if you think the Canucks forgot about the incessant cheap shots the Kings got away with on New Years Eve, you're going to be surprised. Tonight is going to be another game where the Canucks show why they don't need a guy like George Parros. They will match the Kings physically, be smarter than the Kings in the discipline department and make them pay on the power play. This is going to be a game where the Canucks look like one of the best teams in the league. Count on it.

Andrew Alberts is in and Alexander Sulzer is out, one game after Sulzer horrified Canucks fans with his worst game in blue and green. Sulzer looked so out of his league Sunday night, it had some fans wondering how he had cracked the lineup over Chris Tanev. While there's no plan to call Tanev back any time soon, Alberts will get a chance to reestablish himself tonight. Meanwhile, Sami Salo continues to recover from his concussion suffered at the hands of The Nose That Shall Not Be Named. He's not been given a timeframe for his return.

From their self-titled debut album, this band was, along with Queensryche part of a Seattle scene that predates that 'grunge' nonsense by almost a decade. This album is without a doubt one of my 20 favorite of all time, and still kicks a ton of ass to this day. One band I truly regret never seeing live, featuring the late David Wayne on vocals, here's Metal Church with Beyond The Black.