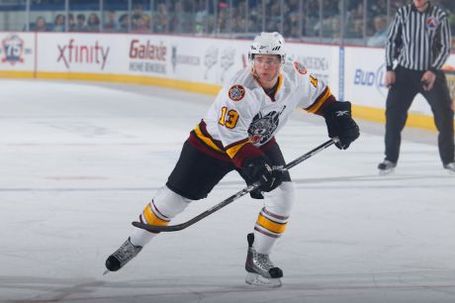 The Chicago Wolves took two out of three possible games this week, but saw their 5 game winning streak snapped on Saturday night at the Allstate Arena with a painful loss to the Lake Erie Monsters. The Wolves currently sit second place in their division, two points behind the Charlotte Checkers with two games in hand and two points ahead of the Milwaukee Admirals, with them holding two games in hand over the Wolves.

All in all, it was a pretty good week. Theres no reason to get down about winning 2 out of 3 games in a week, especially on the heels of a five game winning streak. It started off with a Wednesday morning game against Rockford. Several thousand kids got to take what I consider to be one of the best field trips of all time to go watch a hockey game. The Wolves got off to a good start with Mike Davies opening the scoring with his first goal of the season. Rockford tied the game twice at 1-1, then again at 2-2 before Mark MACHO MANcari took over and scored two third period goals to power the Wolves to a 4-2 win. Matt Climie stopped 26-28 for the win.

Friday night brought in the division rival Milwaukee Admirals, a big game for the Wolves due to the games in hand that Milwaukee holds over us, head to head losses loom large. Once again Mike Davies opened the scoring, but Milwaukee tied the game a few minutes later. The eventual game winner came from Bill Sweatt late in the 2nd period and the Wolves held on in the 3rd, riding Matt Climie’s 32 saves to the victory.

Saturday night the Wolves five game winning streak came to a halt. The Wolves went into the 3rd period holding a 3-1 lead against the Lake Erie Monsters and subsequently gave up four 3rd period goals, resulting in a 5-3 loss. Obviously not a strong finish, but these games happen from time to time.

Mike Duco – Mike has been returned to the Wolves after a nice three game stint with the Canucks, hopefully the fans up there enjoyed them, meanwhile a deep Wolves team gets a little deeper.

Player of the week – Mike Davies – Mike has been out of the lineup for a few weeks, presumably with injury, but he had a strong week back in action with three goals and two assists. Mike is on a Wolves contract, but is a speedy player with great hands and gets a decent amount of second chance goals. He plays with a great energy and its nice to have him back in the lineup.

Coming up this week – Well first off tonight, the Wolves are holding their annual season ticket holder party at GameWorks, basically you talk to players, get things signed, eat food and then play video games until you decide to leave. The Wolves return to the ice on Wednesday night against the Texas Stars, and then play a home and home against the Rockford Ice Hogs Friday and Saturday night.

FANS IN VANCOUVER – Please remember, the Wolves will be in Abbotsford to play the Heat Jan 24 and 25 so pack that game and give the Wolves a taste of how they can expect to be treated by Vancouver fans when they’re called up.