Morning Buzz: Canucks ride the Lightning, plus the mystery of the drunken All-Star goalie

Share All sharing options for: Morning Buzz: Canucks ride the Lightning, plus the mystery of the drunken All-Star goalie

It wasn't a Picasso, it wasn't even your 4-year-old niece's pre-school drawing, but the Canucks managed to get it done. You really get the sense this team is running on fumes right now. They need home for a rest. David Booth, Aaron Rome, and Sami Salo would be nice too.

Before we get to the links, I have something to present to you entitled "The Case of The Drunken All-Star Goalie Who Was Left in to Get Shelled". Intrigued?

Let's face it, booze and hockey have a long and storied history together. Whether you've just won the ultimate prize, or you're lacing them up to go for a midnight skate with your buddies, a game of puck is often followed by a pint or eight. This took a bit of detective work (also known as "frantic Googling"), but it was worth it.

I'm a regular listener of the Marek vs. Wyshynski podcast, and yesterday Jeff Marek told the story of a goalie who played in an NHL All-Star Game while still completely wasted from the night before. It became pretty obvious to everyone involved, and the coach decided to leave him in and watch him get lit up. You can listen to the clip here, it starts around 5:28. Marek wouldn't give away any details, not even the year that it happened. But at the very end of the podcast, Greg Wyshynski let slip that someone on Twitter may have guessed who the goalie was. Take a look.

Poor Mike Vernon, indeed. Now, what year would this have been? Vernon played in the ASG in 1988, 1989, 1990, 1991, and 1993, and would have been representing the Campbell Conference. Looking at past ASG results, the Wales Conference won handily in 1990 and 1993, with scores of 12-7 and 16-6 respectively. Vernon wasn't a starter in 1993, but he was in 1990, and the head coach for the Campbell Conference that year was Terry Crisp of the Calgary Flames. So if I was a betting man, my money would be on Mike Vernon being totally shitfaced at the 1990 NHL All-Star Game. But that's just an educated guess. 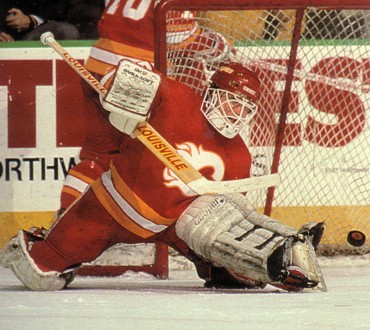 Anyway, let's get to the links!

Today in Canucks history: Absolutely nothing happened, according to the internet.

Today in NHL history: [Jan 11, 1995] NHL owners and players ended a 103 day lockout. It was announced that the regular season would be reduced to 48 games and would start January 20.