Canuck Brunch- Can I Finish?

Share All sharing options for: Canuck Brunch- Can I Finish? 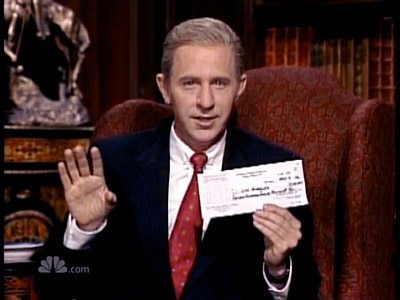 I swear to god, I am so sorry. Really. To the hockey world, and Canucks fans in particular, I apologize. We want to move on past this Bruins game aftermath, but the Bruins are making us feel like Ross Perot. We just want to be done with this, but they continue to say things of such jaw-dropping magnitude that it would be dishonest to look the other way. I mean, it's not like we don't have better things to do. We've got a piss poor effort from the Canucks last night to tear into. For any of you Boston fans or media that might be trolling visiting us, that's where you actually criticize your team's performance, and not just blame the team that beat you of cheating, or the officials. You told us you can't do that, so we felt it was our duty to remind you of that. So, we'll take a look at last night's game, and tonight's contest with the Tampa Bay Lightning. And yes, hopefully the last look at why Peter Chiarelli, Claude Julien and the Boston Bruins think you are a moron.

Let's get this over with, so we can move onto important stuff. The Bruins organization, their media and their fans think the rest of the NHL, and hockey fans in general are stupid. They do. It's the only possible way to explain their actions over the last couple years. They're the quintessential high school bully who's been playing 'stop hitting yourself' with the NHL, daring them to tell the teacher. And when that teacher arrives, they proceed to explain that they were actually the victims in this process. They don't really believe this. They know exactly what they're doing. Brad Marchand didn't contact the league about what was acceptable in a low hit so that he could avoid breaking the rules, but more likely he did it to find the loophole that he could use the next time he tried to hurt someone. And when that time inevitably came, all he had to do is proclaim 'I was just trying to make sure I didn't end up a victim' and he and the Bruins figured they would skate away untouched once again.

Claude Julien and Peter Chiarelli want you to stop picking on them. How many times have we seen this in movies (and real life) where the parent encourages and teaches the child the bad behaviour, yet cries foul when their precious angel gets called out for it. And it's not just that they disagree. They're blatantly calling the NHL stupid to it's collective face. The audacity of Brad Marchand telling Brendan Shanahan and the NHL's Department Of Player Safety what clipping actually is may be one of the most shocking things out of this entire debacle. There's no remorse here. No acknowledgement of committing the infraction and accepting punishment. Just defiant, confrontational words.

The backlash against the Bruins on this one was something we aren't used to. In so many previous incidents, people lined up behind the bully and heckled those who cried foul. Even though many had a hard time with them claiming to be the victim, the ones their discretions were committed against were labelled whiners. The Bruins had found a formula that worked. They were able to plant enough of a seed of doubt in people's heads that what you saw was not actually what happened. It worked when Zdeno Chara broke Max Paccioretty's neck, and it worked when Milan Lucic steamrolled Ryan Miller. So why didn't everyone buy into the lie this time?

The problem is the victim of the hit. There isn't a person on this planet outside of those who cheer for the Bruins that believed for a minute that Sami Salo was going to try and hurt Brad Marchand. Yet there they were, attacking Salo's character immediately after the game. The Bruins really expected you to accept that Sami Salo was headhunting. Their media went into hyperdrive, pushing the 'Brad Marchand as victim' theme. There were very few that took the bait. They tried to say the hit wasn't below the knee, that Salo led with his elbow, that he was charging at Marchand. There was ZERO evidence to back it up. Everything they claimed was dismantled with surgical precision by Shanahan in his video announcing the suspension.

Their comments following the announcement are disgraceful. They question the integrity of Shanahan. It likely will go unpunished, which is unfortunate, because that's a slippery slope. Make no bones about it, they're calling Shanahan an idiot without using the word. And now, the Bruins are in panic-stricken damage control mode, attempting once again to deflect criticism by attacking the Canucks over Alain Vigneault's comments, saying he threatened Marchand. Once again, they think you're an idiot. And you are if you believe this nonsense. What Vigneault said is more like what Brad Richards said about PK Subban: 'Hopefully someone on their team addresses it, because, uh, I'm not saying I'm going to do it, but something might happen to him if he continues to be that cocky'. Did Vigneault say the Canucks were going to do something about it? Nope. He's not stupid. He's upset and rightfully so. But what Vigneault said is a fact. If Brad Marchand doesn't get punished by the league (and learn from this punishment), someone is gonna take it into their own hands one day. That's not a threat. It acknowledges that Marchand's actions are unacceptable, and the best way to deal with it is for Marchand and the Bruins to stop trying to deliberately injure opponents. Having read Marchand's painfully PR department assisted blog post, it doesn't appear there's any intention of changing their ways.

If you were surprised that the Canucks came out flat last night, well, you might be a Bruins fan. The Florida Panthers did exactly what they had to do to take care of a disinterested Canucks squad last night, then hung on in the dying minutes as the Canucks frantically tried to salvage a point. Sure there were little glimmers that they might turn it on last night. Dale Weise's 2 on none breakaway goal with Manny Malhotra was a thing of beauty, in addition to being a situation that no one could imagine happening. Talk about unlikely.

The power play also looked good apart from the inconvenient fact that they didn't score. Funny how that tends to skew your view on things, eh? But as lethargic as the Canucks were, Kevin Dineen's Panthers were up to the test. There were a number of odd-man rushes last night that forced Roberto Luongo into making a number of good saves. If not for Luongo last night might have been downright ugly. Chalk up another 1 goal win for the Panthers, and another missed opportunity for the Canucks, then move on.

The Canucks slide up the coast tonight and into Tampa Bay for a date with the Lightning. Tampa Bay was one of the good stories of the Eastern Conference last year, with head coach Guy Boucher taking his defensive minded team all the way to the Conference Finals before falling in the 7th game to the Bruins. Imagine how different the Finals might have been. In any case, this season has been frustratingly different for the Lightning, to say the least. They sit 9 points behind the 8th place Pittsburgh Penguins (how weird is it to say that?), and a mere 3 points up on the last place New York Islanders. The big issue in Tampa is goaltending. They are relying on hockey's version of the 2,000 Year Old Man, Dwayne Roloson. As good as Roloson was last season, he's beginning to look and play his age at last, and it's certainly got to be putting some pressure on GM Steve Yzerman to try and salvage a season that is spiraling out of control.

As for the Canucks, a chance to put last night behind them and regain a little momentum heading into a big game Thursday against the red hot St. Louis Blues. With the Lightning desperate to try and claw their way back into post-season contention, this game might be a little easier for the Canucks to get back into. Though they don't play there often thanks to Gary Bettman's NHL scheduling nonsense, the Canucks haven't won in Tampa in almost a decade. No word yet on who starts for the Canucks, Roberto Luongo wasn't terribly busy last night but I wouldn't be surprised to see them rest him in anticipation of Thursday's game in St. Louis and give Cory Schneider the nod.

Our condolences to Blues (and Canadiens) fans as we learned that their former GM Ron Caron died yesterday. Caron was part of the Montreal glory days, winning 6 Cups with the Habs, and was affectionately known as 'The Professor' for his encyclopedic knowledge of the game... The Phoenix Coyotes snagged Gilbert Brule off waivers from the Edmonton Oilers yesterday... News out of Tampa has David Booth making his return to the Canucks lineup tonight after suffering a knee injury earlier in the season...

Today we go with the track voted the #1 metal song of all time, in honour of Tony Iommi, who announced yesterday he's been diagnosed with Lymphoma. And, I think we will dedicate this to Peter Chiarelli, and his poor, picked on Bruins.