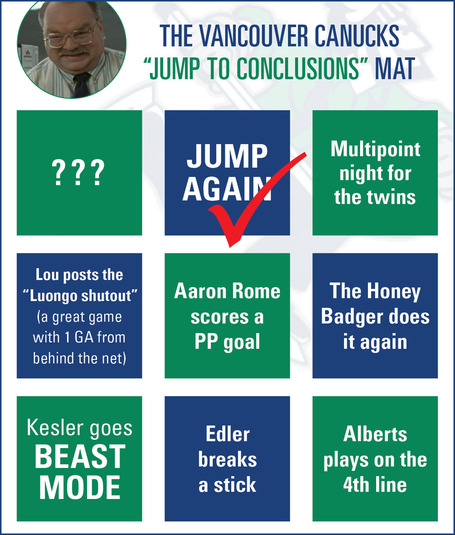 Well, it's not every day that the Canucks shoot a blank on the "Jump to Conclusions" mat. It's also not often that the Sedins have a game that is flat out bad, but both those things occurred last night. Thankfully, the team gets a chance to "Jump Again" tonight against the Tampa Bay Lightning.

Notes from last night's game, the Marchand decision, and a real live NHL Tebow after the jump!

Today in Canucks history: [Jan 10, 1998, a day I'm sure we all remember fondly] Mark Messier reaches the 1,000 assist plateau on an Alexander Mogilny goal vs. Florida, becoming only the sixth player in NHL history to reach the milestone. Messier joined the list with Gretzky, Coffey, Howe, Dionne and Bourque.