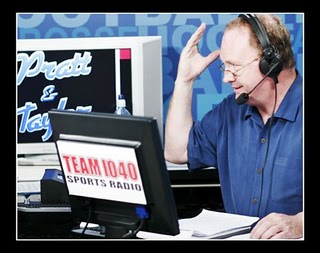 In case you haven't heard, one of the more polarizing but successful figures in Vancouver sports radio has been silenced.

David Pratt and the Team 1040 have said said "adios muchachos."

James Stuart, vice-president and general manager of CHUM Radio Vancouver, the TEAM's parent company, confirmed Friday morning that he was looking for a replacement for the polarizing Pratt, the longtime afternoon co-host.

Sources close to the situation say that Pratt's contract expired at the end of August and the TEAM opted against renewing it.

Some of us learned to live with Pratt's unique broadcasting style while others were quick to bring up his rather lengthy list of tantrums in addition to that whole plagiarism thing. But what of his blog? WHO WILL YELL AT US NOW?
Canucks Army also has a look at the station changes including some potential replacements.
What do you think?