Share All sharing options for: And Boom Goes the Dynamite (Friday Links)

As I was heading home on the skytrain, attempting to ignore the stench of the man passed out/sleeping beside me, I came to a realization. The Canucks, and their fan base, are Wile E. Coyote. The Stanley Cup? The Road Runner. Our entire history is littered with crazy schemes, hair brained ideas, and many many many failures. So many failures. Igor Larionov? Who needs that. Cam Neely? Never amount to anything. Wayne Gretzky? We demand you give us an answer!

We have done so many things to try and catch that Road Runner, but that little bastard keeps getting away from us. Every time we get close to him, he manages to find a way to get away from us. It doesn't matter how many times we poison that damn bird seed, somehow that freaking bird always knows what's up and eludes us.

I always knew as a child that I hated the Road Runner. I always knew and related to Wile E. Coyote far more. Other kids would laugh with delight as the Road Runner would elude Wile E., but I would sit back and go "That's not fair. He had him. He outworked him. This isn't right. He had the perfect plan. I really hate that bird." And now I know why. Because I am Wile. E. Coyote. We all are. We know the pain and suffering Wile E. has had to suffer through. We watch with sorrow as the Road Runner sticks his tongue out and runs away. We know what it's like to get so close only to have it fall out of our grasp.

We deserve a cup, damnit. I don't care what any other fan base thinks of us. We have sat back and waited for this for far too long to let last year be the only shot we have at the Cup for the next 15 years. 2012, this is our year. Ryan Kesler, that kind of player, he doesn't get denied his entire career. He will win a cup. Two Art Ross winners on a team? They don't end a career without winning a cup. Hate Roberto Luongo all you want, but he is a top goalie, and top goalies find a way to win a cup. Some of them do this without going to Detroit. I know the hockey gods make sure the Canucks make a mockery of stats and positive outcomes, but screw that. If Tampa Freaking Bay can win a cup, so can we. 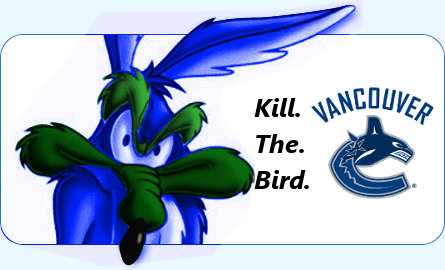 News and links after the jump!

NHL News and Notes
Off the Stanchion Link:
Video of the Day:

In honor of the Jets comeback season, here is an awesome video of some fights between the Canucks and Jets. The best part of the video? Tie Domi screaming at Tim Hunter "Alls I've got to say....is don't dress Bure next game. Don't dress Bure."

Gif of the day:

I made a series of Raffi Torres gif's (I know, shocking, right?), and this one was one of my favorites. The entire theme was to play up the fact that Raffi was the worlds biggest a-hole, so I would ask the question, What Would Raffi Do? Well, this was one such case.