Share All sharing options for: Henrik Sedin: "I’m not the best flyer" 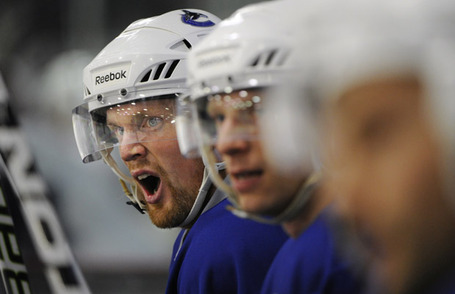 How great a picture is that? Maybe you think our fearless captain is yawning? Showing his O face to a nice young lady in the stands? About to blow fire out of mouth? Or did he just see The Ring? No no, this is clearly his new hypnotoad trance, one that lulls defenders to sleep as he finds Dank all alone in front. Excellent.

In any event, Das Province ran this story yesterday getting the captain's opinion on the tragic accident that claimed the roster of the KHL's Lokomotiv hockey club. Hank provided a few insights into the particulars of flying around Russia, but then provided this:

"Myself, I’m not the best flyer in the world. I’m nervous getting on planes, even though. I know it’s safe. Personally, I wouldn’t go there [the KHL] for a lot of reasons, but that’s one."

Learning off-hand that the captain of a professional sports team that has to travel more than most in the league - beyond the fact Sedin is skipping across the pond to Sweden every so often - doesn't like to fly is interesting. First I can relate since I don't like flying either; I'm the guy white-knuckling his way through each flight with no shortage of help from those little liquor bottles (honestly those things could be bigger). My best guess is that Hank is largely numb to flying from here to there, but a high-profile accident can bubble those dormant concerns up to the surface real quick.

This summer has cast a somber light on the lives of these players. Whether it's John Scott explaining his restless nights just thinking about having to fight, to the private battles of Derek Boogaard, Rick Rypien and Wade Belak and then yesterday's accident that sent ripples across the entire global hockey community, it hasn't been easy. As fans we're often more focused on stats, trends and salaries and tend to ignore these guys are still painfully human (even the ones you don't care for like the dude who goes crazy during a playoff game against San Jose only to be laughed off that team and land in Edmonton during the offseason). It could be something as benign as a fear of flying, but maybe it is something bigger like depression, drug-use or homophobia. Being in the limelight and lugging a heavy paycheck home each week doesn't erase these struggles; often it exacerbates them. Just as you would want a good friend to slay their demons, so it stands with these guys who play this game we love.

In the end, Hank's innocent comment brought the summer into a weird full circle for me. Or maybe that's just the hypnotoad talking.