Share All sharing options for: And Boom Goes the Dynamite (RIP Pavol Demitra)

Instead I am going to work on a top 10 moments of Pavol's career which I will post later. I deal with tragedy in odd ways, and when Rypien passed I dealt with it by looking back and doing a top 10 moments of his career. So I hope you all understand and are ok with not having a daily links for today, it will resume its regular schedule tomorrow.

Two of the biggest memories I have of Pavol Demitra is when he scored on a slapshot on a penalty shot on Luongo (I remember thinkins 'Good god Luongo, you just got punked'), and when Demitra, struggling in the regular season, went to the 2010 Olympics and was arguably one of the best players in the tournament. Demitra had a Mogilny mode where he could just dominate and take over a game when he wanted to, and at the Olympics, Pavol showed such immense talent you couldn't help but be impressed by him (And of course wonder where that guy was in the NHL season, hahah). And of course, anyone who swears and screams "Mother*****er!!" after scoring a goal is a-ok in my books.

Anyways, please talk about your favorite Pavol moments in the comments below if you are up to it. I would like to see what memories stick out for you, as I will use some of them I am sure for his top 10 moments. 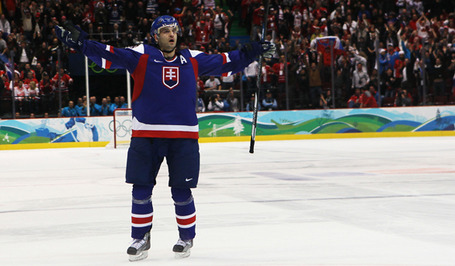