And Boom Goes the Dynamite (Now with less Nolan)

Share All sharing options for: And Boom Goes the Dynamite (Now with less Nolan)

Well the weekend is over and the hit Broadway tour "Chicago.....Wolves" is finally over. They had a moderately successful  run, but many critics felt the cast was too young and that it needed a more veteran presence to stabilize the show. Alas, what's done is done, and all we can do now is review what happened and pick it apart and break it down until we can finally pin point the the reason we lost the last two games, and that of course would be because we dressed too many right handers with brown hair. I swear I can find a stat for this with Cam's help.

With the young guns tour on everyone's mind, most people didn't realize there was another Canucks competition going on, as the Canucks were having their own version of Survivor being held on Sunday. The show, being played on channel 183, the Women's Network 3, is being hailed as "an ok show I guess, filled mostly with awkward moments and smelly hockey gear." One critic called the show "just like 24. Minus Jack Bauer." With such amazing reviews it's hard to tell why exactly the show hasn't taken off, so I feel it is my duty to help promote the show a bit in order to try and get more viewership. So without further ado, I present to you a recap of last Sunday's "Survivor: Canuck Edition" 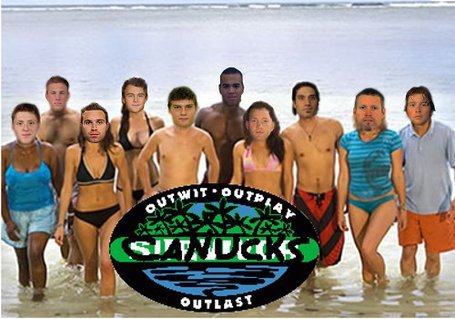 Read all about it after the jump! + Daily News and Links!

This week on Survivor:

The group had just seen Darren Archibald kicked off last week and was still reeling from the discover that Darren had hidden a tiny cache of chocolate bars and hadn't shared them with anybody.

Jensen: I don't know, I still find it hard to believe.

Oreskovich: The dude is allergic to peanuts! His head blew up to three times the size!

Hodgson: HEY! My father says for you to shut up!

Dmitriakos: You know what would solve this? Roasted lamb!

Oreskovich: Stop playing up to your greek stereotype!

Oreskovich: I swear to god....

Mike Duco: Is it just me, or is Jensen looking really really hot

Hodgson: He needs to work his pecks. They seem to be sagging a bit.

Owen Nolan: Now now guys, we should focus on the task at hand. This reminds me of 1997, during the All-Star game. I was but  a wee lass at the time, and I was breaking in all alone on Dominek Hask...

Nolan: I'm pretty sure I don't do that-

Mancari: Yesterday you asked me to pass the salt. A) We don't have any freaking salt, we're on an island. B) You just pointed to the distance and stayed like that for 10 minutes until Duco asked what you were doing. Then you started in on your story again

Duco: Hey man, I thought Nolan was hitting on me. Not that I'm complaining as that bikini looks fiiiiiiiiiine on him

Schroeder: I feel my head is too small for my body.

Oreskovich: It does look really off. Like someone did a sloppy photoshop on your head.

*Fedoruk clubs Niko over the head and begins to eat him*

Oreskovich: GEEZUS! WHAT THE HELL??

Mancari: It's ok, he's just doing his job. Niko took Hodgson spot by the fire. Fedoruk is trained to protect our stars. Assuming he sees it happen.

Oreskovich: This is why I quit hockey, crap like this. I want off this island-

Nolan: This island reminds of the time I was coming in all alone on Dominek Hasek. Some said it was impossible to score on him. I said "Nay, impossible is only what you let it"-

Mancari: I swear to god Owen, I will unleash my MANcari bomb on you-

Hodgson: Sometimes I think I'm too open with the media. I really wish I could learn to shut myself down.

Nolan: Think of the media as Dominek Hasek, and yourself as me, coming in all alone-

Mike Duco: Hey Feds, you want some company in that sleeping bag?

Duco: What ever happens happens baby!

At the end of the episode, it came down to three choices. Dmitriakos was taken off for medical reasons, which made it come down to Mike Duco and Owen Nolan. The Canucks chose to kick off Owen Nolan. Proving once again that old man stories are worse than Mike Duco. 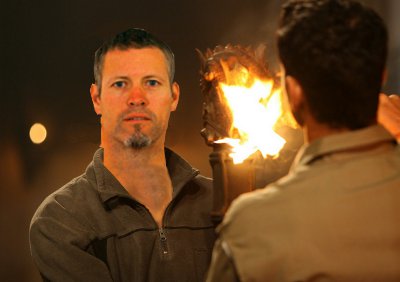 Song of the Day:
The Canucks were rocking "The Whip" as their goal song last night, a song shared by several other teams including the Leafs. I don't care if other teams use it (I think at one point in the 90's it was an NHL rule that Rock and Roll part II had to be your goal song), I am just happy that there is a chance Green Day might be gone as our goal song. What do you think of it? What goal song should we use? Weigh in on the comments!

Locksley - The Whip (via bandoflocksley)