Share All sharing options for: And Boom Goes the Dynamite (Now with more Red Sox failure)

Is he, or isn't he? That is the question on all of our minds. Well, on my mind. The question you ask? Is Mark MANcari playing tonight? I have no idea! I pray that he is, but I don't know yet. So instead, I will wait, and hope, that the Pre-Season Champ gets his shot at playing tonight. With that being said, I feel people don't know Mark well enough, so I did some extensive research on Mark, and wish to share it with you all, so you can have a better idea of just what makes Mark tick.

- Mark's favorite sport growing up was not hockey, but was in fact competitive gymnastics. "I just remember seeing a girl chasing a ribbon on TV when I was young, and I was hooked ever since. You can say getting hit in hockey is tough, but have you tried balancing on a small piece of wood? That's intense my friend." explains Mancari

- Mancari's favorite movie? Was it Top Gun? Was it Gladiator? Was it the Goonies? Nope. "My favorite movie growing up? It had to be Rocky 3. Clubber Lang, one of the all time underrated champions. What do you mean it was just a movie? Get out." screamed Mark, covering up his Clubber Lang tattoo from the cameras.

- Mark's Italian, so you have to figure he loves pasta, right? WRONG. "I don't like pasta to be honest. I just find spaghetti very intimidating."

- Mark's favorite TV show? I assume MANcari had to love 24. But I was wrong. "Jack Bauer, yeah, I get that people like him and all because on TV he looks really cool. But it's just so fake, right? I mean, oh wait, hold on-" At this point Mark pulled out a gun and shot three terrorists coming into the room behind me. " Anyways, as I was saying, it's all Hollywood, stuff just doesn't happen like that." continued Mark.

- Mark's favorite song? I figured for MANcari it had to be some sort of pulse pounding heavy metal group. Again, I was wrong. "My favorite song? Well, it's not really a song, so much as a sound. My favorite sound is the sound of Brad Marchand weeping as I punch him over and over and OVER again. I'M COMING FOR YOU BRAD. THE REAPER IS COMING."

I had many more questions to ask, but Mark noticed one of the terrorists was still alive, so he began to pump him for information. I felt it best to leave at that point. I hope we all feel like we know Mark a bit better now and that this helps you get on board the MANcari train. Remember, a vote for MANcari is a vote for saving the world. 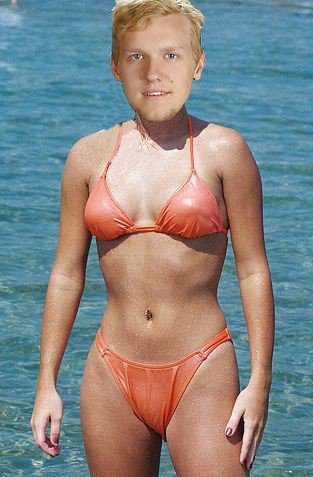 I know a lot of girls love Edler, and I don't want guys to be left out, so I combined the best of both worlds so we can all enjoy him. Don't say I've never done anything for you guys.