Welcome to The Noon Number. This section is generally copying a format shown on a few other SB Nation Hockey websites, and rather than posting infrequently over here with a bevy of statistics. The daily number should produce more digestible chunks.

Today, however, I'm going to debut The Noon Number series without the aid of advanced statistics, just general fawning. The number is 8, the new number chosen by Christopher Tanev. The player's selection of his own number, moving up from last year's 18, shows that the team may have as much confidence in the young player as I do. Also, he scored a shorthanded goal last night! His first in the NHL (granted it's preseason), but, still: TANEV!

There are worse options for your depth defensemen. Tanev, last season, played 400 minutes without registering a single penalty. That is an NHL record by 110 minutes of play over the course of a single season. Tanev played 73 more minutes in the playoffs, again, without being sent to the penalty box. He's a plus-possession player who plays the game wicked smart and doesn't take penalties. At one point last night, I believe a Calgary player (I think it was Desbiens) was trying to rough stuff up in the neutral zone. Tanev ignored the extracurriculars, honed down on the net and took a good shot that hit the post, I believe. He looked natural from that line.

In short, Chris Tanev is my perfect hockey player. He worries about where the puck is and who has the puck. He plays smart. He doesn't try to impress anybody by being tough, because he knows his game is good enough to be successful in the NHL, and I hope he becomes a regular.

Here is a text conversation I had with Thomas Drance of Canucks Army last night:

Cam: Check out how he went for the goal instead of hanging back for the fight

Thomas: God I hope you're right.

Cam: Depends on the minutes, really. Don't see how AV can hold him out. His offensive instincts are only going to become more tuned.

Thomas: And boy does he play the game beautifully...

There is little else to say about Tanev (actually, there is way more, but some of it might get in the way of this heaping praise). I hope that fans of other teams who play off with their "all the Canuck players are dirty, whining diving players" crap do start to take notice of the undersized Tanev, the defenseman who doesn't throw hits or take penalties. He is 21, listed at a generous 6'2" 199, was undrafted, and is the type of player that if everybody played hockey like him, hockey would be so much more fun to watch.

I tossed up this handy chart up on Twitter last night. Feel free to use it for reference: 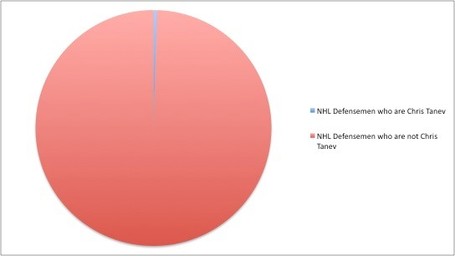