And Boom Goes the Dynamite (Now with more Juice)

Share All sharing options for: And Boom Goes the Dynamite (Now with more Juice)

Ryan Kesler, or as he is known to those outside Vancouver, Ryan Kessler, dropped a bomb on the world yesterday. Was it another photobomb, mayhaps of him appearing behind Henrik Sedin, clutching a mario brothers action figure acting out the alternate ending to the 90's movie (Where Bowser ends up with Mario)? No? Maybe it was Kesler scoring on one leg to put a game into overtime that the Canucks had no business being in? No? Well what was it then?

Ryan Kesler is bringing the Juice. What was that you say? I said, KESLER IS BRINGING THE JUICE. Kesler somehow convinced Kevin Bieksa to join twitter. Bieksa, who has often in the past said he would never join twitter, somehow ended up on twitter last night. The catch? Kesler said Bieksa wouldn't tweet until he got 10,000 followers. What followed on Twitter can best be described as the opening scene of Saving Private Ryan, as people began pouring in online to follow Juice. Friends called up ex-lovers, parents call up kids they hadn't talked to in years, cousins called up ex-lovers, some of whom were cousins, even pets began signing up for Twitter, all in the hopes of getting Bieksa his 10,000 followers. It mere hours, Bieksa gained 10,000 followers. The Canuck Nation had come through once again.

And so the next day, Bieksa gave us his tweet, giving a shout out to his buddy Rypien, and posting a picture of Kesler getting an IV. Is it really Bieksa? Is Kesler just Bieksa-Bombing us? We don't fully know yet. But it's going to be a fun ride regardless. And if it is real Bieksa, I won't stop until he follows me. I have my goal this season. Bieksa, I say this to you; You followed me once before, and it got you to the finals. Imagine what could happen if you follow me twice???

News and notes after the jump! Apparently the Canucks have some sort of day camp going on right now? Also, don't forget, Mark Mancari, PRE-SEASON CHAMP, 2011! 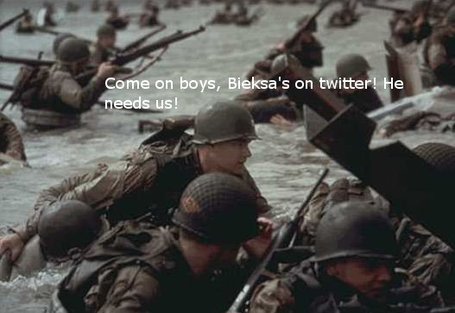 - Chris Pronger made captain of the Flyers
- Bogosian signed a 2 year deal with the Jets worth $5 million,
- Luke Schenn signed a 5 year $18 million dollar deal, and yes, I am sure Pierre McGuire openly weeped with happiness over his HUMAN ERASER getting locked up long term
- Drew Doughty remains unsigned and will have his contract offers lessened for each day he remains unsigned
- The Red Sox are choking, I know this isn't hockey news, but wtf
And one link, the Leafs and Senators third jerseys were leaked. [Icethetics]
I like the Senators jersey. The Leafs have perhaps the worst 3rd jerseys ever in that the only thing that ever changes is the width of the stripes, and occasionally how many points their Leaf has. I honestly don't know why they bother releasing new Leafs jerseys.
Alright, see you tomorrow! Tomorrow will have video of the day and all my usual amazing NHL links, today I was pressed for time due to real life responsibilities. Sean pays me in harsh insults and threats on my life. I have to make money other ways, alas.