And Boom Goes the Dynamite (Now with more Pringles)

Share All sharing options for: And Boom Goes the Dynamite (Now with more Pringles)

Twitter friend JonManChanSays sent word to me of the special limited edition Riot Vancouver NHL 12 released at the midnight release of NHL 12 on Monday night. I was not able to get their at midnight to get my copy, and when I went to pick it up myself yesterday, they informed me they were no longer handing out the Riot Edition. Luckily I was able to track down someone who has a copy of this version of the game, and they gave me the breakdown on what features this version of the game has.

- If you're down by 3 goals in the final period of the game, repeatedly circle the left analog control to leave the arena and light a car on fire

- If a successful riot occurs, press both bumpers to start a mini-game to decide who should pay for the riot. Throw hats and try to land them on the heads of the NHL, the team of the city where the riots took place, the hippies who always sit outside the museum downtown, or that weird guy who hangs out in Chapters yet never reads anything.

- Press X to activate a press conference about the riot. For 50 MS points you can unlock different suits to wear to the conference. NEW: Latest unlockable: Suit with a mustard stain on the right hand side. Let people know you ran here and left a hotdog behind the minute you heard about the riot

- Pringles Pandemonium : A new mini-riot game, try and steal as many Pringles as you can in under a minute. For bonus points, look directly at everyone taking your picture and recording you doing it

- If the riots are too much, NHL 12 has a "Stand and Gaze" mode where you can just sit in the street watching the riots unfold around you

- New Detective Mode: If riots aren't your thing, help solve who partook in the riots. Break down hours and hours of grainy YouTube footage to try and pick out rioters. Where's Waldo add-on can be bought for 25 MS points

- Kiss and Tell mode: Run around and circle the right analog control to take down a person, then hit Y to kiss them, X to stroke their hair, A to tell them it will be all right and B to tell them you're leaving for Australia, and it's been fun, but you both knew where this was headed

- Nut Shot mode: Avoid flash bangs to the nuts by deftly jumping left and right as the cops begin their assault on you. New Buzzer add-on attaches to your pants so when you're hit, it feels like you really got hit! (Warning: May cause pants to catch on fire.)

- Start a Rumor Mode: Did a Bruins fan get pushed to his death? Did anarchists around the world plan this? Was Mothra behind this entire thing? Start a rumor by hitting the right bumper anytime you see a reporter. Bonus points for tweeting a rumor and having it take off. Pictures taken out of context will help give you the ultimate score. "That guy is holding shoes by a burning car. His shoes must be filled with bombs."

- Throw Away a Career Mode: Stand by a police car for 3 seconds repeatedly tapping B until someone takes your picture. For 50 MS points you can download the "Water Polo Player" skin.

News and notes after the jump! This days news is brought to you by Betty White, because you asked for it. 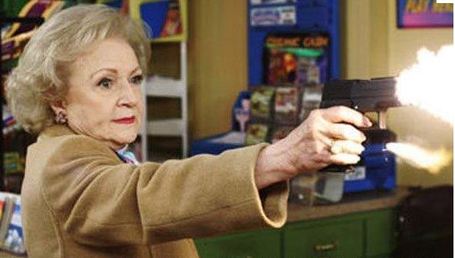 Seriously. Brett Hull-esque one timers? Be still my beating heart. So awesome.

The best part of this YouTube video, as it usually is, takes place in the comment section. Apparently some dude stole the video and posted it as his own. Yes, someone stole a video of a one timer goal in NHL and passed it off on their own. The fight even has a "I guess you need the view count" style insult. Man, it doesn't get better than that. I assume it was David Pratt who uploaded this version.