Share All sharing options for: And Boom Goes the Dynamite (Thursday Links)

Bob, a Canadian, is walking down the street with a case of beer under his arm.

His friend Doug sees him walking down the street and stops him to say hi. "Hey Bob! Whacha get the case of beer for?"

Closer and closer we get to hockey! Can you hear that? The sound of an Aarom Rome giveaway? Can you smell that? The smell of Keith Ballard's finely pressed suit in the press box? Can you see that? The MCL and ACL separating in Marco Sturm's knees? Hockey is slowly inching it's way back into our hearts, and I for one, can't wait to update my Aaron Rome jokes! With that being said, let's look at some news from around the NHL and about your Vancouver Canucks! 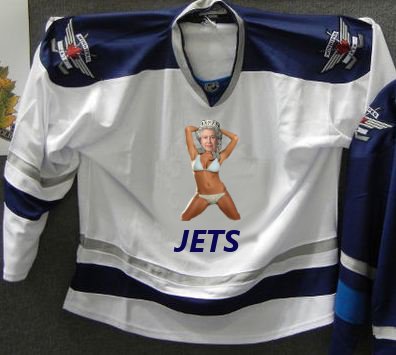 A throwback to the some of the ugly jerseys worn for charities: [Click Me. Now.]

It's Thursday. And as you can see, I can't left align my paragraphs anymore due to that picture of the Queen. Awesome. So let's celebrate with a funny non hockey video. Many of you will have seen this, but for those of you who haven't, please check out two of the best pranks of all time.

Prank War 7 - The Half Court Shot (via collegehumor)

I am very proud of this one.