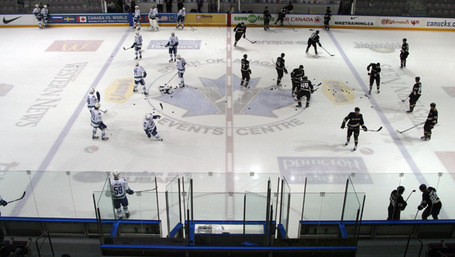 As we try to understand the latest tragedy to hit the NHL community, the wheel turns, and the latest young men with hopes of joining the fraternity will gather next week.

Here is the Canuck list of young men that will be there, and here's some info I could glean about some of the invitees this year, plus some totally arbitrary handicapping of their chances of signing some kind of deal.

The first name to jump out in Marc Anthony Zanetti. Dude already has over a 1000 Twitter followers , He had 5 goals and 27 assists in 47 games as a valued defenseman with the Ottawa 67's, and was a Wings camp invite last year . My pick for getting a contract out of Penticton.

Craig Duininck - Well, this could be awkward. He is the guy that stood up for his goalie when Darren Archibald did this , and while it looks like a toughness thing, the guy did have 7 goals and 15 assists in 66 games last year in Windsor. Read this interview with the young man from his first year in Windsor, and you can see the kid is a Gillis guy. He was a multiple Academic Player of the Month a few times that year, and models his game on Brent Burns. Contract? Maybe, its a big organization. He sure fits the mold.

Ian Saab - Check out this kid's hockeyfights page. He had 21 fights in his time with the MAINEiacs over the last two years. Hell, he had a fight ( no link even up yet!) yesterday in Q' preseason play. Yet another Canuck kid on Twitter! Well, he hopes anyhow. Contract? Meh. He did have 3 goals and 5 assists to go along with his 106 PIMs, but will have to show more, no? Now another Sea Dog.

That's the blueliners. What about up front? Well, how about a 20 year old right winger that was better than a point a game last year, Jonathan Lessard? He better not pull this shit here, like last year. The QMJHL seems to have a fair amount of this stuff, and I don't know the circumstances, but Jesus kid! Maybe if he makes the team in some respect we can ask him on Twitter too! Contract? If he impresses, hell yeah! Point a game in any league is great.

There is a local kid, one Ryan Harrison, from Kelowna. He will be sure to have many folks there in Penticton, at any rate, and he did have 8 goals and 11 assists in 29 games in Everett last year, to go with his 55 PIMs in the same time. The rest of the year in Medicine Hat, the kid had 13 goals and 20 assists in 40 games, along with a +10,(-2 in Everett games ) and a more manageable 47 minutes in the sin bin. Toughness and skill is always intriguing. The kid is 5'10", and is already 190 and plays tough.Hmmmmm...Contract? Almost a point a game( well, closer to .750), and plays tough too? Possible. His fave team is the Canucks, for what that is worth.

These other forwards are ones I am going to put in the longshot category. Possible camp surprises, or just something to tell their kids about one day? Well, there is Andrew Smith. He is from Cornerbrook Newfoundland, is 6'5" and 210 lbs, and he is not 20 until October. Check his DB page, and guess which column he has filled! Interesting insight here on how a player is scouted, and he sounds like a good kid that wants to turn some heads.

There is a Michael Curtis, a self admitted "two way player" who was called the "cream of the crop" as a young kid in Toronto coming up through the minors with the same kids, including Ryan Strome. Story here. Sounds like yet another good kid. Steven Janes, another Toronto kid, who is 6'2" and 180 at 18 years old. Long time coach of the Ottawa 67s called him a hard working, physical kid when he drafted him into the OHL. He was injured last year, only playing 17 games.

Or how about Nathan Longpre, who will be the oldest young man there at 23 and a half, and maybe should not be called a longshot ( though who knows how big numbers in Atlantic and Colonial University Leagues back East will translate) Check out some of the places he has played. In 4 years at William Morris University, he had 49 goals ( 24 in his last year ) and 138 points ( 42 in 33 games last year ) in 137 games played for them. Played 8 games for the Wochester Sharks last year as part of the Sharks organization. Their loss is our gain? He seems perhaps one of the longshots that has at least a glimmer of a chance. You know how MG loves him his university grads.

Perhaps Antoine Roussel is more what you are looking for in a longshot. He was in Providence ( the Bruin affiliate ) last year, and had a goal and 7 assists, to go with 88 PIMs, in 42 games. In 4 seasons previous in Chicoutimi in the Q', he was a prolific scorer. Check out some of the eye popping PIMs in the Q' though! And he is only 5'11" and 185. The French native was called feisty when Providence called him up from the ECHL last year, Ummmm, yeah. But something tells me the Canucks are looking more to see if they can find the talent that led to all those junior points underneath the feistiness.

And finally, just so the young goaltenders don't feel left out, the Canucks and their scouts have an invitee at that position too. He is a kid from California named Brendan Jensen that played for your very own Vancouver Giants last year, and in 30 GP, had a 3.76 GAA and a .875 sv %. You have to think that they had multiple looks at the kid though, seeing as he is just on Renfrew. He has got size. In this story from his draft year into the Giants from THN, he was 6'1" and 170 already. He was a Sharks fan as a kid. ( other great tidbits in this story here, including how he got to be the #1 for the G'men by season's end. ) Contract? Who knows? Goaltending is an interesting position, and you can never have too many big guys that can play the position.

So, there you have it. Maybe a couple get into the organization, maybe a few surprise. All I know is hockey is only a little over a week away for these kids, and for us!