The Canucks waited patiently while the Lightning and Bruins took their series the full seven. By sheer coincidence I watched that game at a Boston-friendly bar and enjoyed the banter with most of the folks...until a little after the Horton GWG. The chat took a predictable trash-talking turn, but all in good fun and, in hindsight, utterly G-rated in comparison with the sideshows that accompanied this year's Cup Final.

Putting the media machine noise aside, the series from a goals perspective was similar to the opening round: when the Canucks wanted to, their puck management was solid, leading to good transitions and quality chances down around the goal. On the flip side, when they were off their game their weaknesses were (easily) exposed and the goals against came in droves. Immensely frustrating to watch.

Naturally it wouldn't be a season swan song if we didn't bring up defensive injuries which isn't pointing a finger of blame, but rather a sober reminder that some things actually do stay the same year to year.

After the jump the goal charts and some final notes.

Using ESPN, NHL.com and CBS Sportsline, here is the (approximate) goal chart for the Final round; Canucks' goals are plotted on the left, Bruins' on the right. 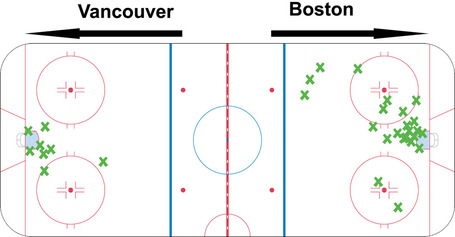 Boston's scores are below, including the location they beat both Luongo and Schneider.