Continuing our look at where and how the playoff goals were scored we have our friends from the WCF San Jose Sharks. Heading into the third round the best guess was the series would be a coin flip between SJ's forwards and Vancouver's defense (which was a similar vibe we'd hear in the SCF). This was by and large true, however Vancouver also received far more production from the backend which helped them tremendously over the course of five games.

Thanks to a strong third period to take game one, a pure thrashing two nights later in game two, some special teams success in game four and a hard-fought game five with a fortuitous bounce that will haunt Sharks fans for awhile, the Canucks outlasted their Pacific coast opponent.

After the jump, the dirty details.

Using ESPN, NHL.com and CBS Sportsline, here is the (approximate) goal chart for second round; Canucks' goals are plotted on the left, Sharks' on the right. 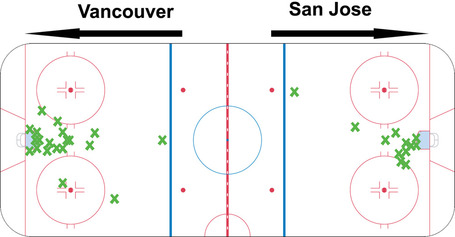 The San Jose view of the world is below, including the location they beat Luongo. Once again no Schneider was required.