One of Vancouver's past criticisms was they could never get past the second round of the playoffs, but this year they managed to do just that by beating the Predators at their own game: stingy goaltending, responsible defense and some timely offense primarily from the KesLord (who stepped in for the "seriously I'm not injured" Henrik Sedin).

After the jump is the goal chart for the second round, showing how Vancouver solved Rinne, where Nashville scored on Luongo the most and a quick reminder that all pending UFA wingers should follow Ward's example.

Using ESPN, NHL.com and CBS Sportsline, here is the (approximate) goal chart for second round; Canucks' goals are plotted on the left, Preds' on the right. 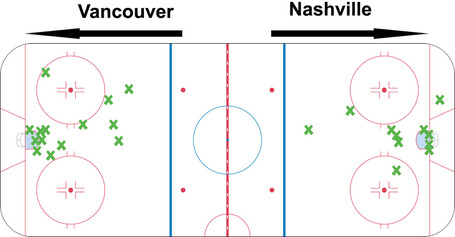 Here's the Nashville scores, including the location they beat Luongo. Hey no Schneider this round, that's a win.