Share All sharing options for: Stanley Cup Final Goal Chart - Round One

I tortured myself recently by watching every single goal scored in the four rounds of Vancouver's Cup run and decided to plot them to see if anything stood out. In hindsight there's a good deal of other activities I could have charted at the same time: pass charts, hits, penalties taken/drawn, etc. Perhaps later this summer I'll take another stab at it, but overall I wanted to know how Vancouver found paydirt as well as how the opponents solved Luongo/Schneider.

I originally was going to put all the charts and tables in one uber post, but it became a bit unyielding to read so I'll go round by round instead with a recap at the end. Ultimately the charts provide a different view of a story you already know: Vancouver had a rough first round, played stronger against Nashville and San Jose and - though close - were fairly schooled at both ends of the ice in the final.

Using ESPN, NHL.com and CBS Sportsline, here is the goal chart from the first round; Canucks' goals are plotted on the left, Hawks on the right. 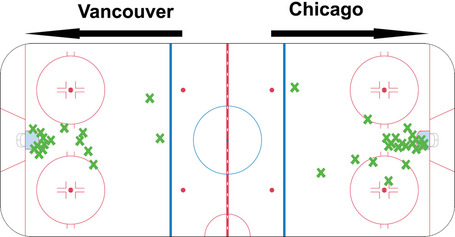 Here's how Chicago scored, including where (location) they beat Luongo or Schneider.