Smithers To Show Canucks-Bruins Game 4 On The Big Screen

Share All sharing options for: Smithers To Show Canucks-Bruins Game 4 On The Big Screen 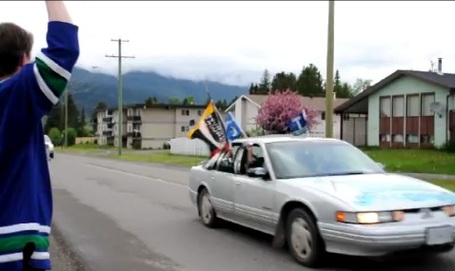 Smithers has become increasingly festive as the Canucks' playoff run has gone on. Now, tonight, they are taking it a step further. As reported yesterday, Totem Audio will have a big screen TV outside the store so fans can watch Game 4 on Main Street between 3rd and 4th Avenue. Party starts at 4:30. I would imagine that you'll have to hide your booze in a thermos or whatever your trick is. But really, this is a community/family event so...be civil.

If the Canucks win it should be a most excellent celebration in Hamhuis Land, even though the poor guy is out with a serious injury. A story... a man named Thomas Wilson had talked to the Mayor of Smithers before the Finals asking for permission to have the Canucks Fan Parade vehicle procession. The Town allowed vehicle parades for up to 30 minutes after the Games end. I noticed no police vehicles after the Game 2 win, and the parade lasted a lot longer than 30 minutes. (Nice!) Just remember to have a sober driver, no open alcohol in the vehicle and to be buckled up. Just because there are cops in the parade doesn't mean they are not waiting somewhere to bust someone.

I plan on making appearances at the big screen viewing and taking some pictures. But I will be watching most of the game in front of a home theater system in a place where I can hear the play by play and don't have to squint to see who has the puck. If there is a parade of vehicles...well you know I'm gonna get in on that action.