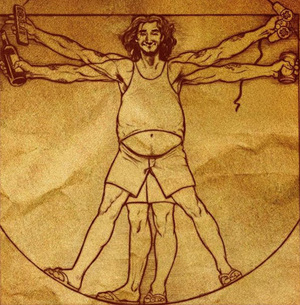 I've never claimed to be a genius, but it doesn't take a rocket scientist to see that the rhetoric surrounding this series is so out of control, it's maddening.  From the timing of Aaron Rome's suspension and the reaction to said hit, to the utterly ridiculous bile spewing from reporters and fans left in the Canucks' dust, to the on ice antics on both sides, this series is leaving a foul taste in some peoples' mouths.  If anyone truly believes this series is dirtier, or more violent than any final in the past, they're either willfully ignorant or well skilled in the art of historical revisionism.  And it's never been more glaring than the case of Aaron Rome.  Suspended for the rest of the finals for a late hit, one that NHL Disciplinarian Mike Murphy admitted would be legal if not for the timing, has seen media from the Bruins and other Canucks detractors howl like jackals with words like 'headhunter'.  It's so dishonest, especially when you consider the number of people using incorrect depictions of what actually happened during the hit.  Journalists calling a guy with zero history of dirty play a predator.  And non-Canucks fans are lapping it up.  It makes you wonder if Idiocracy truly has arrived.

It's one thing for fans to sit there and spew nonsense about topics they're not terribly enlightened on.  That's a given.  Our side is no better than their side.  We have idiots in our fan base, so do they.  And so does every team in the NHL.  Yet there are those who wish to paint this team's fans with a wide brush.  We have seen this for a while, yet with the focus of the finals, everyone is zeroing in on us.  And then the team itself.  You would think the Canucks were the direct descendants of the Syracuse Bulldogs if you paid attention to some scribes.  It's hardly a surprise that most of the bile spews from a few specific places: Edmonton, Calgary, Toronto and Chicago.  A combination of barely disguised contempt and sour grapes sees a lot of these writers throw journalistic integrity out the window and take on the persona of the stereotypical internet troll: hurling dishonest garbage from the safety of their keyboards.

The NHL, in it's attempt to do what's right, got it wrong.  And those of us who follow the game know that this is hardly a surprise.  We all know that taking concussions seriously is a huge priority.  But is the time for a precedent setting suspension during the finals, when worse hits in finals past, let alone this years playoffs recieved less or no punishment at all?  There's lots of talk about how they had to send a message, but when given 3 crystal clear chances to do just that in the last round, they chose not to.  From the Ben Eager hit on Daniel Sedin, to the Jamie McGinn hit on Aaron Rome in the Canucks/Sharks series, one which saw Rome injured, to this head scratcher by Michael Ryder on Blair Jones from the Bruins/Lightning series, they were given plenty of room to show off this new found commitment to protecting players from dangerous, reckless hits.  Instead, they go eye for an eye, removing Rome from the series.  It's not that Rome didn't deserve a suspension.  No one's saying that here.  But in the NHL's effort to look like they're doing the right thing, they messed it up.  Throw in the revelation that Murphy contacted Leafs GM Brian Burke on this, even if it was just procedural, and it reeks.

So in the wake of all this, we get articles on how the Canucks are the most hated team in the NHL.  Players who either fell by the wayside on the Canucks march to the finals, and those whose teams didn't even make the dance are weighing in from their high horses.  It's one thing to have a player not involved in the playoffs sit in on a panel on TSN or Sportsnet, it's another to give credence to the pot shots of scrubs from other teams, rivals most of them.  You don't like Maxim Lapierre?  Too damn bad.  While his finger taunt was funny at the time and may have ignited the Bruins, for the most part max has been rock solid for the Canucks.  You need guys like that to win the Cup.  And teams like Dallas and the Oilers know that well.  Every team has them.  Spare us all the sanctimonious crap, especially you Dave Bolland.

So let Barry Rozner continue to have his little hissy fit over there in the Windy City and embarrass the team he writes for and the profession.  Let the haters spew their crap.  Intelligent hockey fans, whether supporters of the teams involved in the finals or not know this is no different than any other year.  But in this world of increasing media saturation and the fans having a louder and more prominent voice than ever before, you have to wade through a lot of sewage to find the truth.

I hate that I had to spend that much energy talking about the sideshow and not what truly matters.  The game is what's important here, not what some shmoe playing for Dallas thinks.  And after taking a 2-0 lead, the Canucks looked like they had everything under control.  I don't think a lot of people were surprised that Boston won game 3, but it was shocking the way they won.  If there's a bright spot in all this, it's that the Canucks have managed to rebound astoundingly well from bad losses, and no one has been more prominent in this than Roberto Luongo.

Luongo's detractors will tell you the Bruins are in his head, and there's countless references to Chicago and Chelsea Dagger.  If you really believe, after the kind of performance Luongo has turned in since those 2 bad losses in the first round, I question just how much you know about him, this team, and this game.  The coaching staff have done an incredible job of keeping this team focused in their one game at a time mentality.  There's not a doubt in my mind that this team isn't going to come back and get back to playing their game.  In a way, the Bruins did themselves a disservice by potting 8 against the Canucks Monday night.  It's far easier to just walk away from a total washout game like that, than the losses the Bruins suffered in the first two games.  So if Roberto Luongo gets back on track, and the team sticks to the game plan, and this game stays close, the doubts and the painful memories of those close losses in Vancouver will begin creeping back in.

We don't know yet what is happening with the Canucks' D in the wake of the Rome suspension, but it seems the likely move is to see Keith Ballard and Christopher Tanev draw in, and Andrew Alberts sit.  Alberts went from such a solid performance in Game 2 to a stomach churning one in Game 3 that you can't imagine Alain Vigneault going back to him.  The Ballard/Tanev pairing has looked good, especially in the limited minutes they've recieved, and their speed and breakout abilities could help the Canucks get back to exploiting the much slower Bruins defence.  The main key for the Canucks however is seeing Alexander Edler and Christian Ehrhoff to shake off their truly dreadful performances in Game 3 and get back to their normally solid 2-way games.

The Canucks' other key tonight is getting their suddenly anemic power play back on track.  The Bruins PK has outworked them in every opportunity, and the Canucks have to make the adjustments similar to the way they did against San Jose and get what was the best power play in the league for most of the season and hands down the best one in the playoffs, especially on the road back in gear.  The key is outhustling the Bruins to the rebounds that Tim Thomas is so plentifully dishing out.  That might be one of the biggest factors so far in this series, the fact that like they've done most of the season, the Bruins' D have done a fantastic job clearing away the pucks from Thomas.  The Canucks getting to loose pucks and forcing Thomas to make that 2nd, 3rd and 4th save, and get him scrambling is is key.  When Thomas gets moving, he either makes a mind blowing save, or like we saw on Alexandre Burrows' OT winner in Game 2, he embarrassingly overplays it.  Thomas himself has turned in some stinkers this post season.  And much like Luongo in Game 3, he's due.

The Canucks aren't shaken.  They're still confident.  They're here because they deserve to be here and tonight they will get the split and head back to Vancouver for a Game 5 that could see them raise Lord Stanley's Cup on home ice.  And unless you're an idiot, you know they're as deserving as every other previous champion.

Part of a prolific period that saw the band deliver 4 albums in 5 years, this one stands head and shoulders above the others as this bands shining moment.  From one of the greatest metal tunes of all time, to a collection of solid, kickass songs that showcase the dual guitar attack of Glenn Tipton and KK Downing, and the air raid siren vocals of the Metal God Rob Halford, if you're a metal fan and don't have this in your collection, you're just wrong.