Share All sharing options for: Sunday Morning Coffee- Well that was fun... 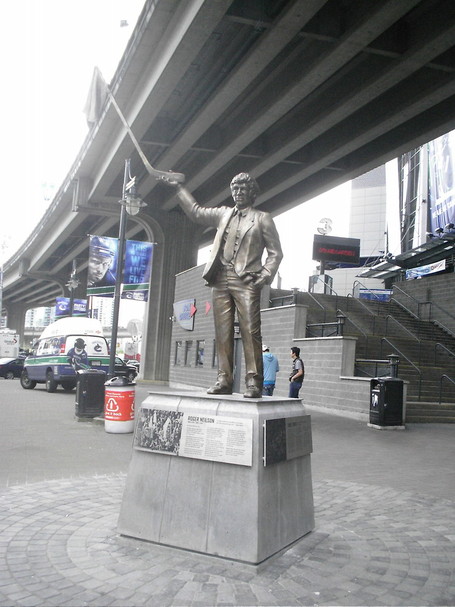 You have to hand it to the Canucks.  In one of the world's most hockey crazed markets, they gave their fans a season that was just short of amazing.  The only way it could have been better (aside from the obvious) would have been Ryan Kesler ending a hostage taking at Rogers Arena by leaping into the stands and... uh, well it looks like my brain has switched into summer mode already.  It seems like training camp was so long ago, years even.  The expectations for this team had never been higher.  Changes, made in response to a second straight 2nd round loss to the Chicago Blackhawks were in place.  A number of moves, both in the front office and on the ice designed to not just get the Canucks past this hurdle that had humiliated them, but to make their way to the finals.  They had a plan in place.  And they damn near pulled it off.

I remember back to the start of the season, where some Canucks fans stated that anything less than a Cup win would be a failure.  I have a serious issue with that line of thinking.  The Stanley Cup is without a doubt the hardest trophy in sports to win.  82 regular season games for the right to challenge, then 16 wins without bowing out.  A more realistic way to look at was the one I took: Anything less than a finals appearance would be a failure.

The finals took on an almost surreal feel, especially being there up close.  While I had never been closer, there were times that I felt very detached from it all.  The immeasurable thrill of getting into the dressing room to get post-game comments from the players was outweighed by the need to not appear like I was cheering for them.  In the end, I learned that even the most grizzled press corps vet succumbs to this.  Both sides had journalists very much throwing all semblance of impartiality out the window.  The national media?  Their agendas were clearly laid out even before Boston had dispatched Tampa Bay.

The smoke has now cleared, and for the third time in team history we are left with that horrible taste in our mouth (no, not tear gas) that comes from being the losing team in the Stanley Cup Finals.  It takes a while but trust me friends, you will feel the pride from this incredible season.  So many team accomplishments.  Awards, and all of them well deserved.  Am I in denial, looking to all of these things that so many feel mean nothing without the big prize?  No.  Look, losing sucks.  All the technological glory that is High Definition could not effectively transmit the pain in Ryan Kesler's eyes that I saw standing two feet away from him.  It shouldn't have ended this way.  It did, however and the thing that Canucks fans need to accept is that the only failure was that they didn't win the series.  The season was not a failure.  The playoffs were not a failure.  There are a great many people who would have been happy to see either Alain Vigneault or Mike Gillis shown the door after the loss.  When I read the thoughts of people who say things like this I really wonder how much they understand about the game.

We were told we were close, but we needed to fix some things if we wanted to be able to get past the 2nd round.  It's amazing that Gillis and Vigneault and his staff aren't given more credit for doing that very thing.  The team was termed 'soft' and not the kind of team that could have success in the playoffs.  I still shake my head when I see detractors of the Canucks bash them for correcting the perceived downfalls.  Yes, the Canucks targeting the ways that the Blackhawks were able to defeat them, and not just correcting them, but using these things to in turn defeat the Hawks were something shameful in the eyes of some hockey fans.  Canucks bashing had by the time the puck dropped for Game 7 against the Bruins turned into an orgy of blind hate, ridiculous vitriol that spent most of it's time wavering between the inaccurate and the hypocritical.  Both teams engaged in an all out war.  One team was branded scum for it.  Both teams did what every team that has faced off for Lord Stanley's mug have done, yet the media made sure we knew that the Canucks were somehow different.  Chicago won the Cup last season by doing whatever it took to win.  The Canucks and their fans were to be ridiculed for this.  We're no dirtier.  We don't dive more.  We're just like every other team that has realized what it takes to win the Cup.  And it's the fact that we almost pulled it off that bothers you, causing you to hurl these untrue, inaccurate and often ridiculous statements.  This team does some things I don't like.  They're not choir boys.  But for people to suggest that the other 29 teams honour have been besmerched by the Canucks is asinine.  Your team would do the exact same thing.

I sound a little bitter.  Perhaps I am.  Sour grapes?  Absolutely not.  My issue is not with losing to the Bruins.  They were the better team, and even if they hadn't been, Tim Thomas would have stolen that series for them.  There's no shame in losing to them.  Yet this is the mantra of an army of drooling simpletons across North America right now.  Canucks bashing has become so trendy I actually feel embarrassed when I see people doing it.  Even Puck Daddy, that most venerable of hockey blogs decreed that the booing and taunting of Minnesota Wild fans at the draft this weekend somehow had something to do with the with the riots after Game 7.  While the riot taunts might have been fresh ammo from them, all it did was give them something to howl besides sexist barbs about the Sedins.  Hey, at least they hated us before it was cool.  Their hate is pathological at times and quite one-sided, but whatever.  It is what it is.  Their fans acting like jackasses all weekend anytime our name was mentioned?  If that makes us losers, then I guess we'll take that badge and wear it with pride.

I guess what I am trying to say is that if you let anyone's opinion of what this team accomplished this year colour what your heart tells you, then you've failed as a fan.  Sure there are times where you need to criticize your team.  Hell, we've made an industry out of it.  This team, warts and all came within a game of winning the Cup.  If you can't see how much better that was than the last two seasons, or the previous 16 or even any of this teams 40 years, then I feel bad for you.  There's so many reasons to be proud of this team and what they accomplished.

As for the haters, I do enjoy the effort you put into it.  It's disheartening though when you consider what all that effort could go towards instead of your hate.  Or even legitimate criticisms of the team as opposed to the usual garbage.  I am not here to tell you how to do your life's work though, so keep doing what you do.  For true believers, the bile you spew is our fuel, and when the Canucks raise the Cup next year, we shall drink it, mixed with your tears like the sweetest wine.  And then when we lop off the heads of the defeated, we shall place them upon stakes outside the Arena and... oh, I'm getting all metal again, aren't I?  Look.  You hate us.  Some of you have good reason to.  Most of you don't.  Either way, I'd be worried if you didn't.  People always hate the success of others, especially when it comes at through their own failures.

This will be my last post for a little while.  I will be doing a Five Hole For Food piece when they make their Victoria stop, but other than that I will be focusing on other things during the summer.  I want to thank all of you, every single one of you who make this so much more than just another blog.  It's a real community, and a welcome haven for those who aspire to get more out of the fan experience than CDC has to offer.  Thank you to Missy, Dan, Nucksandpucks and Cam, and Arby for being such great writers, each with their own style.  A huge thank you to Sean and Yankee, I can never repay you for the opportunities you've given me, but rest assured the first beer is on me when we finally meet.  And finally, a thank you to MrsWaachcast.  She keeps me motivated and centered, on task and up when I am down.  You made me realize I could do this, just like you have so many other things.  You're the best, baby.  Love you.

Finally... it wouldn't be a coffee post without a little metal, right?  Check out this one, the band is called GHOST.  They're from Sweden, and have a real Blue Oyster Cult vibe to them.  The band never reveal their faces apart from the singer (well, sort of), and they dress in monk's robes.  Amazing stuff, there's a number of great live vids of them on youtube you should have a gander at.