The Canucks entered Saturday with all six of their picks remaining, but that ended quickly when they moved their  second-round pick to the Wild in exchange for their 3rd round (71st overall) and 4th round (101st overall) picks. That should give you an indication of how deep the draft is and Vancouver's bet the guys they targeted wouldn't be around near 60. Cue the dark horses! 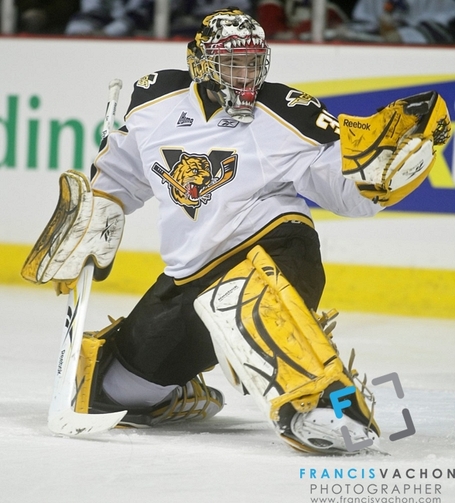 At 71st Gillis drove right back to the Q well with 17 year old goalie David Honzik, a 6'2'', 207 lb prospect from the Czech Republic. He played for the Victoriaville Tigres this past season, going 17-12 with a .884 SV%. If you feel like rosterbating like a meth addict, he's been compared to Pekka Rinne. Hockey's Future adds:

A big goaltender, Honzik moves very well in the crease. Playing a butterfly style, he sometimes drops down too quick, but thanks to his large frame, he takes up a large part of the net even when on his knees. With such noticeable improvement over the course of the season, some think that Honzik is just scratching the surface of his potential. 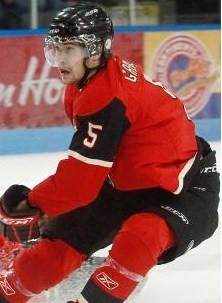 With the 90th selection Gillis went - where else? - back to the Q and Halifax Mooseheads' RW Alexandre Grenier. At 6'5'' and 211 lbs, 19 year old Grenier went 9-15-25 in 31 games this season then added 16 points in 15 play off games. Here's a good compilation video; note how the kid towers over everyone. Hell he'd do the same if he strolled onto the Canucks right now. He's a bit of a late bloomer, but nevertheless Dan Sallows notes:

Along with having excellent size and reach, he is a good skater, with nice hands, good puckhandling skills, has a tremendous release, adept hockey sense and vision, and plays an overall complete game. 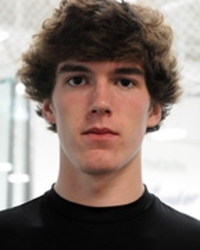 At the 101 spot, the Canucks stuck around Minnesota by selecting 6'4'', 194 lb center Joseph LaBate from the Academy of Holy Angels. Labate picked up 52 points in 26 games for his high school team this year and added all three playoff goals the team before they bowed out to Prior Lake. He's committed to play at the University of Wisconsin in the fall. In an interview with McKeens LaBate admits to modeling his game off Dave Backes and Joe Thornton. Minnesota Hockey Prospects, take it away:

[LaBate] Has the combination of size and speed that drives scouts giddy. LaBate is a mature player that has developed nicely over his high school career. Is capable of getting dirty and playing a physical game or can step it up a notch and play with finesse. Has great one-on-one skills, having the ability to carve into a defense, picking apart every weakness. 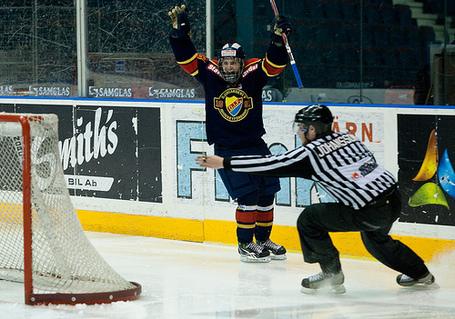 Vancouver skipped across the pond to the Swedish Junior league at 120 and likely leaned heavily on Gradin's opinion to select 6'1'', 198 lb left winger Ludwig Blomstrand (I hope he makes the bigs because I want a reason to say "Ludwig" more often). He played 35 games this past season with Djurgarden Jr. going 3-4-7. Eliteprospects.com teases us:

Potential to become an excellent role player. Has great size and wheels and works really hard. Gets involved in the rough stuff. Somewhat limited offensive upside. 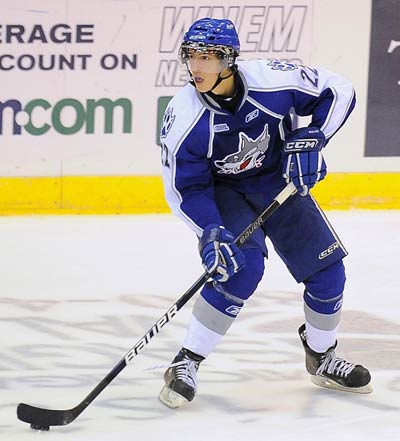 Vancouver finally added a blueliner into the mix by taking Frankie Corrado from the OHL with the 150th pick. At 6'0'' and 174 lbs, the Sudbury Wolves defenseman went 1-8-9 this season with 46 PIMs. The Hockey News had him as a dark horse selection. Listed as a good sleeper pick, the Scouting Report described Corrado as:

Corrado has put on a lot of size and his game is laced with more confidence and puck poise. He’s a very good skater with great acceleration and has good offensive tools. His defensive game is improving, but positioning is still an area of concern. He could also stand to do a better job of moving the puck, but his decision making is improving. His shot has gained a lot of power and will be utilized with more powerplay ice-time.

If you want to get close and personal with our new D-man, you're in luck. 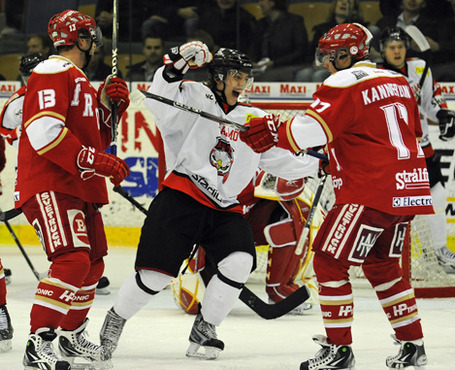 At the 180 spot Vancouver high-fived Gradin because he somehow found another Swedish twin: 5'11'' and 185 lb Swedish Elite League center Pathrik Westerholm. He went 32-25-57 this year with Malmö and added six points in five playoff games. His scouting report should sound remotely familiar:

A skilled offensive player. Has great chemistry with his twin-brother Ponthus. Good hockey sense and is the more noticeable goal scorer of the the two. Passing and shooting game is good and so is his puckhandling. Cycles the puck often with his brother. The question has been raised if he can be a productive player without his twin.

If you're curious about his brother (and naturally you are), he wasn't taken in draft and sounds very much like the Henrik Sedin of the pair, playmaking and cycling and looking for Pathrik for the score. Let's say it now: it's only a matter of time before Ponthus is Vancouver property and a Canucks training camp could have a pant-ruining three sets of brothers at the same time. 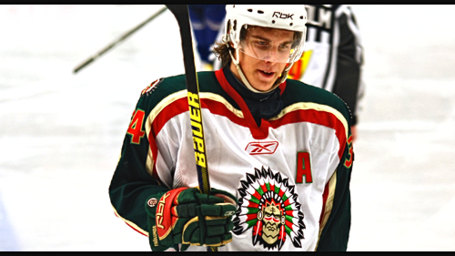 With their final pick at 210, Vancouver stayed in the Swedish Elite and nabbed Henrik Tommernes, a 6'1 and 176 lb defenseman who played with Frölunda last season, going 3-17-20 in 47 games. Eliteprospects with the skinny:

A mobile, offensively skilled defenseman, Tömmernes is a very good skater and playmaker from the back end. Has terrific hockey sense, so his defensive game is solid as well. Often gets his point shots through the traffic in front of the net.

Vancouver did a decent job considering their poor positioning each round. Gillis had discussions for Brouwer but deeming him not worth a first rounder (totally agree), he jumped on Jensen who could be a valuable addition to the team in a two, three year window. Honzik brings Vancouver's goalie prospects to five (along with Cannata, Iilahti, Mensator and Weiman, six if you want to chuck Lack into the mix). Alexandre Grenier seems destined for bottom six duties, but he's also the biggest prospect Vancouver has which alone warrants some attention and intrigue. LeBate could develop into be a strong addition or he hits the college level and devolves into Patrick White. Blomstrand feels more project than sleeper but, on the other hand, I'm excited for Corrado: his game is progressing nicely and could be a helpful addition sooner rather than later. Keep in mind Bieksa was a fifth round pick as well, selected one spot ahead of Corrado. The Westerholm pick is like a two-for-one on top of the fact he had a strong season in a skilled league. Tommernes is another decent sleeper who may never evolve past the juniors, but has the skillset to be an offensive-minded D man in a system with no shortage of Swedish players who can assist him along the way.