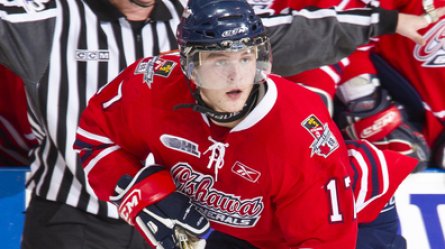 When the dust settled and the irrelevant Minnesota crowd get their boos out of the way, Mike Gillis declined the urge to follow last year's model, kept his pick and went somewhere he rarely has gone before: namely taking a right winger in the form of Oshawa Generals forward Nicklas Jensen. He joins Anton Rodin as the only notable RWs MG has drafted.

Jannik Hansen may want to stick around for a bit.

At 6'3'' and 187 lbs, he has the size, speed and skillset to be a player we could grow to love in a few years. Jensen was selected 8th overall in the 2010 CHL draft after going 12-14-26 with the Herning Blue Fox in the Danish Oddset Ligaen league. In his first season with the Generals he went 29-29-58 in 61 games and followed that up with seven points in five games at the WJC.

Overall Jensen could be that player that becomes the steal of the draft and becomes an 80 point scorer at the NHL level.

He is projected to develop into a playmaker at the NHL level because of his vision and ability to find his linemates in tight areas.

His big hurdle is no different than many prospects: consistency. On some nights scouts have seen him drive to the net with the authority and execution of big-bodied winger like Rick Nash and other nights he lacks the physicality to be a top six threat, drifting quietly away into Brad Isbister land (ok that was uncalled for). He seemed to adapt well to the North America style through the second half of the season, but still needs to work on positioning and using his frame more effectively. Scott Reynolds over at the C&B noted that "his relative +/- in the regular season was +4.8, which tells that he wasn't a defensive liability on that team, but he wasn't exactly a dominating force either."

Clearly there's some room to grow and mature, but that's to be expected. The raw talent certainly appears to be there and it'll be up to the coaching staff of the Chicago Wolves (man that's going to take some time to roll off the tongue) to coax the best out of him on a regular basis. If they can Vancouver may have drafted a top six game changer. Nothing not to like about that.

He also loves the Simpsons. Do with that what you must.

Welcome to the party Jenk.