Share All sharing options for: A Collection Of The Canucks' Game-Winning Goals From The 2011 Playoffs

The disappointment of the loss to the Bruins is quickly subsiding for me (if you call 3 days of dejection and misery "quick") and so what I'd like to present to you are videos of every Canucks game-winning goal scored from this year's playoffs. Honestly, this loss will never sit well with me, nor will the 1994 and 1982 losses. I hate 2nd place. But what I can do is mope over it, OR I can congratulate and celebrate the Canucks team that gave us a lot of terrific memories this past season and focus on the positives. I can live with the fact that several of our guys were playing hurt and couldn't get the job done in the end. I can live with being thankful to the team for giving us so many terrific memories this season. I have thoroughly enjoyed sharing these experiences with you all and with the fans up here in Smithers. So raise your glass to these guys and toast the wonderful season that it was while enjoying the visual candy that I am about to present...

Higgins tips in a Bieksa point shot to make it 1-0 Canucks over Chicago in Game 1. They would win 2-0:

Aww..Samuelsson gives Hawks fans a sad in Game 3 (you know we really could have used that guy..)

Alex Burrows slays the dragon..or plays exorcist..or whatever in one of the biggest goals in Canucks history. He scored the only 2 Canucks goals in Game versus Chicago. This never gets old and never will:

Higgins, for the second series in row, pots the game-winner in Game 1 of a series for Vancouver. Hey man nice shot!:

Shea Weber in the P Box in OT and the KesLord gets his 2nd goal of the game:

The KesLord is at it again in Game 4 scoring another PP goal and this was THE BEASTLY BEAUTY:

A bit anti-climatic, but Daniel Sedin scored the series winning goal against the Preds in the 1st period of Game 6, a PP goal, paving the way for 96 tears from Carrie Underwood:

The Canucks kinda had their way with the Sharks, as Hank's PP GWG in Game 1 shows:

Did I ever tell you I love that Higgins guy? Well he scores his 3rd game-winner of the playoffs in Game 2 vs the Sharks. Another PP goal. The 4th goal in a 7-3 win:

Salo's turn to be a hero..and his heroics showed up on the PP this night..his second of the evening as the Canucks win Game 4 4-2. This performance by Salo really still stands out to me for some reason. Great to see the oft-injured old guy have a super game:

Game 5 versus the Sharks..Second OT..Thanks stanchion for the assist! One of the strangest series-clinching goals evah! And who bags it? Bieksa! On to the Finals!

Alex motherfcking Burrows to the rescue again in Game 2 OT. Nice fail, Timmy and Zdeno. Man I thought we had a choke hold on the damned B's at this point..:

The final winning goal..a beauty set play by Bieksa to shoot it wide and Lappy squeaks one past Thomas in Game 5:

Feel any better? It's hard to isn't it? I know I feel better browsing through all these videos.

I would like to re-iterate that it has been a pleasure mingling with all of the members of our Nucks Misconduct Community. We live and die by our team but we also have grown as friends through the experience of this website as well through the team and personally. For that I am eternally grateful. Remember: despite hating the loss, celebrate what our Canucks did in 2010-11. It was a beauty of a season! 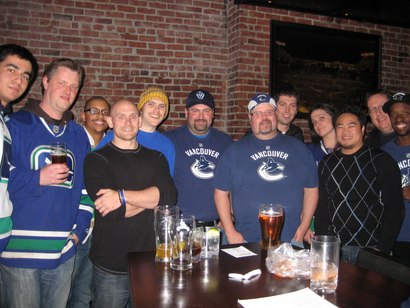