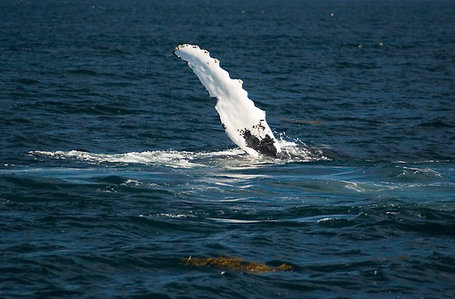 Back in the whaling era, after a crew successfully harpooned a whale they'd let the creature swim violently in a circle before finally dying, its last movement being a beat of the tail and a single "fin out", the final act before the whale expired.

You may as well learn a thing or two on an obituary post. Think of it as help for your next bar trivia outing. You're welcome.

So about game seven...

Congratulations to the Bruins and their fans. Once we remove all the extra curricular activities and frankly the media embarrassment all over the place, they were simply the better team and should have the Cup. Tim Thomas deserves the Conn Smythe and the Vezina soon afterwards. Simply a fantastic player. A special shoutout to Bergeron who came alive after his injury and when they needed him. Marchand - though a disgusting puke of a player - had the puck on a string. It all came together for their team when it mattered and that's what counts. They deserve their moment.

On to Vancouver...this sucks. I mean this really sucks. It's beyond words, no way around it. In this final round they played what I'd call bipolar hockey which was a bad way to dance with the devil. They never owned the inside lanes, they lost their neutral zone dominance, they dealt with too many injuries, Luongo wasn't strong when they needed him and they'll celebrate their 40th year like all 40 before it: a disappointing ending. These aren't excuses, just facts. If they wander the desert again and it takes many years to get back to this moment, you'll remember this game for all the wrong reasons.

It's going to be too easy for the world to dump on Vancouver. Own a stiff upper lip because the haters are going to hate something fierce. So be it.

At the same time, let's celebrate what we were treated to this season. First and foremost they were within 60 minutes of the Cup. That comes on the heels of their Presidents' Trophy (54-19-9), their Western Conference championship, Northwest championship, 363 consecutive sellouts, one Art Ross Trophy,  one Jennings Trophy, one Hart nomination, one Vezina nomination, one Selke nomination, one Jack Adams nomination and one GM of the Year nomination. I'm probably missing some other records in there but let's just high five Dickens when we take shelter behind "it was the best of times, it was the worst of times."

Most of this core is locked up and they have some kids chomping at the bit. The future is bright, they know painfully what it takes and can rise from the ashes better than anyone. But that will sound better in September. For now it feels hollow and it'll be a long road to redemption...

...and we'll be there every step of the way. Guaran-fucking-tee it.