On the eve of Game 7, a painful anniversary

Share All sharing options for: On the eve of Game 7, a painful anniversary 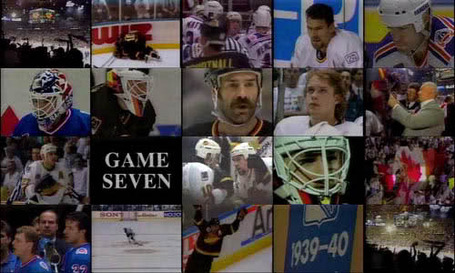 It is a painful anniversary: 17 years to the day that the Canucks lost Game 7 of the Stanley Cup Final to the New York Rangers. It is sore topic for me to discuss, and I have never revisited details or highlights of that game beyond what is mentioned in conversation or shown in NHL commercials. My memory of the game is foggy, given that I was 10 at the time and that so many years have passed since then, but I remember the emotion of that game all too well. It was crushing and devastating for so many fans who invested so much - emotionally, socially, and financially - into the Canucks.

Tomorrow's Game 7 I will remember for the rest of my life. I am hoping against hope that these 2011 Canucks can do what the underdog 1994 squad could not do. And in the process, take some of the sting off of that painful loss 17 years ago. I already have one painful Cup Final memory. Fans older than me may have two, given the 1982 squad's sweep by the New York Islanders. I don't know how much more our collective psyche can take. But all that can be put aside with one more win to cap this amazing season.