Share All sharing options for: Flipping coins for goaltender consistency

If you're like me, you probably spent last night sitting in your parents' basement flipping a coin to test the effects of momentum on the coin. But you probably aren't, but I think I still have a few notes to share with you before I go wander aimlessly around Vancouver for a few hours before gametime and clear my head. I don't recall ever being this nervous before a hockey game, even the Olympic Gold Medal game. I think that that's because I knew that team for two months, and I've cheered for Team Canada maybe a hundred times in my life.

With the Canucks, I've cheered for them since I was four years old, and through all these years where the Canucks suffered from terrible, terrible goaltending. After the Canucks traded Kirk McLean, there was nothing until Roberto Luongo, except for a brief island in November of 2003 where Dan Cloutier channelled his inner Jacques Plante and won NHL Player of the Month. There was the goaltender graveyard, headlined by such padded luminaries as Alex Auld, Sean Burke, Garth Snow and Bob Essensa.

We are spoiled, now, but nobody really seems to care. The conventional wisdom in the Stanley Cup Finals is that Roberto Luongo has been great, but inconsistent. Writers point to his performances in Games 4 and 5 of the Chicago series, and Games 3 and 4 for the Stanley Cup Finals to show that Luongo does become unravelled. Okie-dokie, but where is the criticism directed at Tim Thomas?

If you flip a coin a few hours to take your mind off things, and record, the results, you notice that no matter what preceded it, you can't better predict heads or tails. Some crafty logician might have you think that, since the chances of heads and tails are 50/50, that after hitting heads, there is a higher likelihood of the next one being tails. That's hardly true. Out of the 180 coins I flipped, 51% of the time, the result would actually be the same as the last flip, and over time, that would eventually balance out. So why not apply the same thing to goaltenders to see who is more consistent? Which goalie is the best at flipping coins?

A few goalie metricians have a 'quality start' metric readily available. I won't go into the detail, but the target number for a goaltender is a save percentage of .913. Over the course of the season and playoffs, I tallied up the result of each of Tim Thomas and Roberto Luongo's games as a simple "yes, they got over .913 save percentage" or "no, they got .913 or lower".

Thomas hit the benchmark 69% of the time compared to Luongo's 63%, however, Luongo actually followed his quality performances by another quality performance 67% of the time to Thomas' 65%. While I have no doubt these numbers would balance out over time (and one season isn't a terribly good indicator of anything, but is a good way to kill a few minutes of nervousness) I actually looked at when a goalie followed a result by a similar result. Only 51% of the time, did Tim Thomas follow a 'yes' performance by a 'no' performance, while Luongo did 59% of the time. With 163 games of data between the two of them, there may be enough variance between the two goalies to suggest that maybe there's something to this. Maybe Tim Thomas is a little more inconsistent than Luongo and scatters his games all over the map.

If the averages balance out, Thomas, who has hit over .913 four of five times in this series, and Luongo at just three of five times, tonight might be one of those nights where the coin flips against Tim Thomas. It would come nary too soon, and provide comfort to the poor kid below on the right who had his heart ripped out by the New York Rangers six months after that picture was taken. 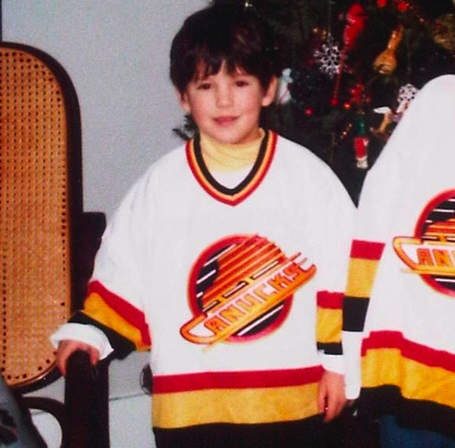 This means a lot to us all, who have been around the team for as long as they can remember. Bandwagoner or not, as reasonable of a fan you try to be, there's no sense in not getting a little emotional no matter what happens tonight (or, God forbid, Wednesday). I have since grown up and moved away from Vancouver but the next few hours might be dedicated to doing all the things I did as a kid, just to clear the head. Bike up and down Dunbar St., go grab a rodando at Mexicali and sit in the rain somewhere. Maybe around my old house, where I watched the Canucks lose in that Game Seven, but has since been bulldozed and rebuilt, the cure-all for demons.

Somewhere I can sit and flip coins and fill my head with good feelings about tonight. The numbers, in my head, are stacked against Tim Thomas tonight. They just have to be, and if not for me, for that poor kid in the photo.