Friday Stanley Cup Coffee - A shoe for you and your little rat, too...

Share All sharing options for: Friday Stanley Cup Coffee - A shoe for you and your little rat, too... 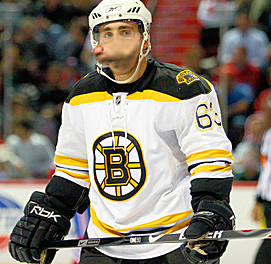 Pretty crazy, isn't it?  I don't know what's worse to be honest: the liberties the NHL allowed the Bruins to take over the last 2 games, or the ones taken by the media.  The Canucks are no angels, not trying to say that at all, but it doesn't take a rocket scientist to figure out the NHL promise to punish players who don't cut the BS after the whistles and the cheapshots was predictably a hollow one.  An isolation cam on Brad Marchand backs this up, as he was given free reign all game long, to hack, slash, facewash and taunt and it wasn't until, in heroic fashion with the game out of reach he clotheslined Christian Ehrhoff then lowbridged Daniel Sedin.  His 'hands dusting' taunt as he went by the bench?  Unpunished.  And the media fawns all over him now, calling him a rat as though it were a badge of honour.  But much like Aaron Rome's ill-advised late hit on Nathan Horton awoke the Bruins, Marchand's pathetic and gutless display will be looked upon when the smoke clears as their Buckner moment.  The ball just rolled between their legs, folks.  They're dead, and don't even know it.

Much like that moment when Red Sox 1st baseman Bill Buckner watched a dribbler of a ground ball roll between his legs and give the New York Mets an extra inning win over the heavily favoured Sox in Game 6 of the World Series, Marchand has given karma and the Canucks a back door into this series when it looked like the Bruins had the Canucks on the ropes.  The Mets went on to win Game 7, and Buckner will forever be known as one of the biggest goats in sports history?  Okay, perhaps I am guilty of a little hyperbole here, but given the tone of this series I think it's well justified.

Though the NHL had stated it wasn't, numerous journalists continue to use inflammatory words when describing Aaron Rome's hit on Horton in Game 3.  Predatory.  Vicious.  Headshot.  Cowardly.  All being used to describe a hit that the league ruled would have been legal if not for the timing.  So my question is this: if this was a late hit as the league states and nothing more, why is it okay for journalists to continue to dishonestly represent this hit?  Even a GQ article yesterday tearing down Boston fans referred to the hit this way: "Aaron Rome lined up Nathan Horton, watched him get rid of the puck, took three strides, dipped his shoulder, leapt for the head, and blew him up".  That's probably as far removed what actually happened as I've seen described thus far.

And then there's the case of Mike Milbury.  Oh yes, Mad Mike decided to up the ante from his hysterical rantings about Alex Burrows from Game 2, and his hypocritical free pass for Bruins players doing the same things he decried Maxim Lapierre for in Game 2.  This time, during the Versus broadcast, he decided to tear into the Canucks twin superstars, referring to Daniel and Henrik Sedin as 'Thelma and Louise', a play on the tired, old 'Sedin Sisters' insult.  That's the kind of thing you expect to hear from opposition fans, bloggers and such.  But from a national media commentator, it amounts to a character assassination of the 2 players who are poised to become back to back Hart Trophy winners.  Was this posed to them in the dressing room?  Was it muttered off camera, and reported by someone who had been in earshot?  No.  Milbury used his platform to utter this ridiculous, sexist insult.  It amounts to a character assassination, and likely stems from 2 sources: Milbury's blatant affection for his former team, and his obvious distaste for European-born players.

The Canucks response was swift, and put best by Cory Schneider: "Who cares what he thinks?  If he'd been their general manager he would have traded them in their first year anyway like he did with everyone else. One guy is a Hart trophy winner and the other is up for it this year and we have complete faith and confidence in these guys. Who cares what he thinks?"  So here's the deal, Mike.  Today I beg you to step out from behind the booth and say it to their faces.   You can finish your cowardly hatchet job the way you know best: Pummeling them senseless with a shoe.  And if you like, I will find one for you, so you don't have to scuff up your fancy Italian loafers.

Sorry that I had to go back to the ridiculous distractions that have plagued this series, but these things needed to get out.  Back to what really matters.  As well as Boston played over the last 2 games, the Canucks certainly couldn't have been any worse.  They played right into the Boston game plan, unraveling all the work that the coaching staff and management focused on from the start of the season: Speed, controlled physical play, and most importantly: playing whistle to whistle.  It was disheartening to see Alex Burrows, Ryan Kesler and others losing their cool to the Chicago-style trolling of the Bruins.  But they can and will overcome it, just like they did against their nemesis in round 1 of this year's playoffs.

As far as the goaltending goes, there was never any doubt in my mind that Luongo starts.  This is still his team, and with the Canucks getting back to the fundamentals that made them so tough to play against all season long, Luongo will once again not be hung out to dry and prove he's just as damn good as the guy 180 odd feet down the ice from him.  To a man this team needs to focus on winning each shift, and go from there.  Don't get sucked into retaliation penalties.  Don't try to embellish, there's enough dirty play from the Bruins that they won't need to.  Just go hard whistle to whistle.  That is what got them here.

The team that wins this game is likely to go on to win the series.  It's been a complete battle of home ice advantage thus far.  Hold serve, and get ready to end this in Boston on Monday.  Go Canucks Go!

The 3rd album from the NWOBHM legends was the first to feature Bruce Dickenson (ex- Samson) on vocals, replacing Paul Di' Anno.  The album was an instant smash, due to the incredible leap forward songwise from the first 2 albums as well as the controversial cover art and the video for the title track.  Interesting trivia tidbit: One of the guys who appears in the devil suits in the video is none other than Nicko McBrain, who would go on to replace then drummer Clive Burr.