You think you're excited?  You're not alone.  An entire province is on the edge of their seats as they collectively clock watch, awaiting the start of Game 1.  It certainly seems like that goal that Kevin Bieksa wobbled pass Annti Niemi was ages ago.  The Canucks spoke this morning about some of the challenges that this long layoff presents, and more importantly, the challenge that lies in their opponent: The Boston Bruins.

Yesterday Canucks captain Henrik Sedin said he felt that the 8 day layoff was too much.  He said today he felt that "four or five days would have been good.  I mean, we like to play games.  We don't really like to practice as much. It would be nice to get going earlier.  But this is the way it is.  It's not a disadvantage".

The Canucks have won 7 consecutive Game 1's, and they will look to keep that streak alive tonight.  When asked about the importance of winning Game 1 and what it's meant to the Canucks in each round of this year's playoffs, he replied " It means apart from being up 1-0, it gives you confidence, it shows you can play against the other team.  You don't really have to change a lot of things. You go out, you're up 1-0, the next game they're going to have to make adjustments to beat you. That's an advantage, for sure".  Coach Alain Vigneault veered more towards the team line when asked about though.  "Other than you're three games away from winning that series, I mean, it's one game.  Our philosophy - you've heard me say this I don't know how many times this year - has been one game at a time.  We get ready for that game, we play it, we analyze it, make the adjustments that we need, and move on.  That's what we're going to do tonight.  After that we're going to get ready for Game 2".  Alexandre Burrows added "We like to feed off our crowd, feed off that energy, have good first games. At the same time we have to focus on what we got to do to be successful.  If we do that, we'll get the result we're looking for".

It's been confirmed that Manny Malhotra will not play tonight, and at the time of the scrum all Vigneault would say is that "Manny is the same as he was yesterday.  He's day to day.  Not skating today".  The 4th line will go with the speed and size combination of Alexandre Bolduc at center, flanked by Jeff Tambellini and Victor Oreskovich.  Other than that, Christian Ehrhoff and Aaron Rome are good to go, we should get completely confirmed lineups later this afternoon.

One of the things that may help as far as battling nerves is the international experience that many of the Canucks have, with Roberto Luongo, Ryan Kesler, Daniel and Henrik Sedin all having played in Olympic Gold Medal games.  Daniel said  "I think this is obviously the biggest game you can play.  I think you look at Olympic finals, World Championships.  But when you play this long, with good friends and teammates, it's the biggest game you can play.  I mean, you played 82 games just to get in, then it's a long run in the playoffs, too.  For sure the biggest games you can play in".  Vigneault added "Well, I think most of our players at one time or another, whether it be at this level or another level, have played big games.  I'm very confident that once the puck drops tonight, our emotions are going to be at the right level".

One of the biggest things people are anticipating is the matchups.  While Henrik was fairly complementary about the potential of having to go through Boston's Zdeno Chara to achieve success, Ryan Kesler was at his surly best when he quipped "I think we're getting a little ahead of ourselves there (smiling)" when asked about going head to head with David Krejci's line, adding "That line's very skilled.  If I am, in fact, matched up against that line, it's going to be a tough challenge, just like every series".

The Bruins made a few players available this afternoon, but hardly like the star power of the Canucks.  Patrice Bergeron answered scrum questions alongside players like Andrew Ference, and Coach Claude Julien spoke about not buying into the underdog mentality, that the slates had been wiped clean and the Bruins were here because they earned the right to battle for the Cup.  With a lot of Western Canadian connections and being an Original 6 team, there will be a few Bruins fans in the seats at Rogers Arena, but this city may never have heard a building as loud as this one when the Canucks take to the ice.  Coming up before game time: Some quotes from the Bruins presser and Gary Bettman's address to the media before game 1. 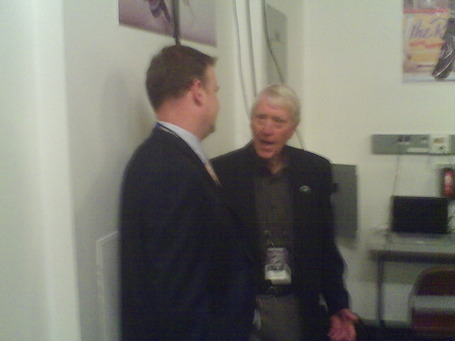 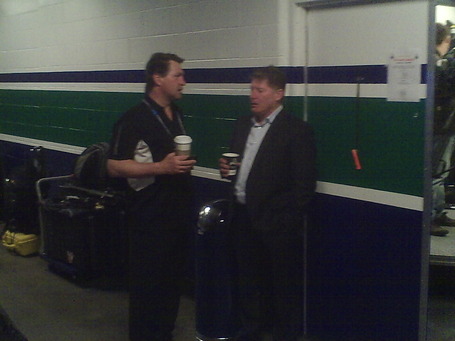 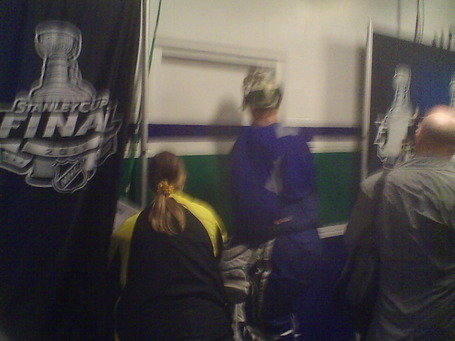 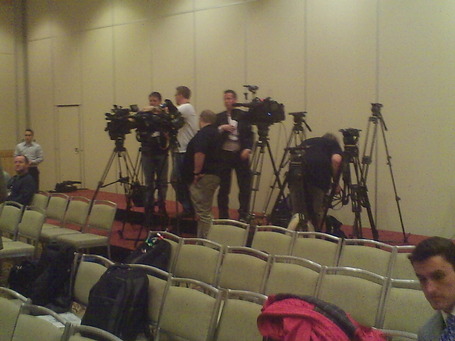 Setting up for the Bruins presser