Make No Mistake, It's Not Revenge He's After, It's A Reckoning: Canucks & Bruins - Game I

Share All sharing options for: Make No Mistake, It's Not Revenge He's After, It's A Reckoning: Canucks & Bruins - Game I 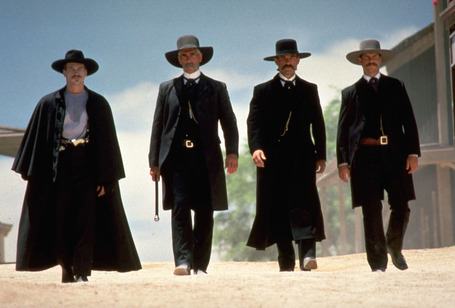 Did You Know: Massachusetts isn't without a sense of irony.

...at long last here we are. A Cup Final at home. Canucks hockey in June. Crazy.

Game one will set the tone against the only original six team Vancouver has never played in the post season. With Boston comes a mix of the best from Nashville (defense and netminding) and San Jose (size and offensive depth). As such you'd expect Vancouver has learned a thing or two about neutralizing their opponent's best weapon, increasing the likelihood they walk out of Rogers with their eighth straight game one win. Key to all of it is their speed (Tambellini back in the lineup should be the dead giveaway): they managed to move the puck superbly in the neutral zone in the third round, dictate the play and slowly tire the opposition, especially as the game past the 30 minute mark.

Unless tonight's emotions get the better of the goalies, it shouldn't shock anyone if these are all one-goal games, so limiting the high percentage shots is vital. In other words, Vancouver has to stay the hell out of the box. Boston's PP may be comedic in its inefficiency, but they still can unwrap Kaberle alongside Seidenberg and/or move Chara in front of Luongo for the cosmic mismatch that is Chara Vs. Bieksa (or anyone really). Boston won't be gifting many PP chances back at Vancouver, so why play into their hands?

It's called home ice advantage for a reason other than a random set of pierced nipples on exposed breasts. Plaster the Sedins against Boychuk at every possible moment; hell have them waiting there when he walks out of the bathroom. If that match-up is lost, then it's up to Kesler's line to make life extremely unpleasant for Boychuk and Ference and Lapierre's line to find (or continue?) their timely offense against their rarely-used third pairing.

Rinne was good prep for Thomas. Keep bodies in front of him. Keep him moving. Keep him guessing. Make Timmy's life hell. The more frustrated that one player becomes the closer to four wins Vancouver will be.

Watch what Julien does with Seguin. The kid exploded in the first two games of the seven he's played. He's their X factor, especially if he jumps up into the top six at Recchi's expense. Seguin with Bergeron puts their two highest GFON/60 players on the same line and creates a formidable top six.

For the final time, let's get it on the record: Paper tiger or sleeping dragon?

...You stand in a rink and you see the faithful wave their towels or their shakers, you hear the choir of their voices in a temple of all that is pure about our game, and you know there is no place else to be. You know there are sixteen teams, then eight, then four, then two, then one, and when that one team is yours, all the energy in the universe channels through Stanley into your cells, your molecules, your atoms...

This is their moment.