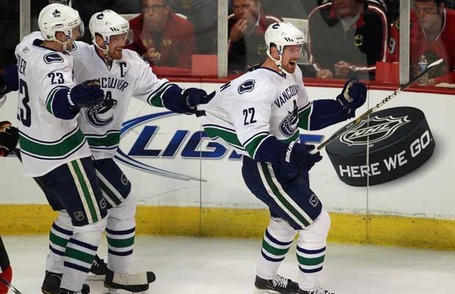 Daniel! Come back, I don't want you to disappear on me again!
Photo: Jonathan Daniel, Getty Images

Unless you've been hiding in a cave in Afghanistan like Osama bin Laden okay that joke doesn't work anymore, and saying "hiding out in a mansion in the middle of a suburb" just doesn't have the same effect.

Back to the point - if you're following this team, and have some sort of connection to the news, whether online or in print/TV form, you've most definitely heard the deafening roar of the masses/some journalists over the so-called Houdini act our beloved Swedish twins have been performing all post season.

Let's get this out of the way first - the defensive play of Daniel and Henrik has often left to be desired in the 12 games so far in the 2011 Stanley Cup Playoffs. And by often, I mean about as often as Pierre McGuire saying something incomprehensible when a Canadian Junior team player scores a clutch goal. I've yelled at my TV countless times these playoffs when they've been hemmed in our zone, unable to clear, or have lazily backchecked and missed coverages.

On the flip side, please for the love of whatever, STOP COMBINING MINUSES. Plus/Minus is lacking enough as a statistical measure to begin with, but people make it magnitudes less informative by saying "The Sedins were a combined -7 last night". No they weren't. If they are both on the ice for the same goal, that means together they are -1. If Daniel was on the ice for one goal, and Henrik was on the ice for another (without the other being on as well) THEN you can say "combined they were -2". Let's think of it this way. In Game 6, the Sedins were on the ice at the same time for 3 goals, and Daniel was the ice for a 4th that Henrik wasn't. So, combined they were on the ice for 4 goals against. Not 7. Please stop this.
(also, those minuses last game were not warranted.)

Back to the magic disappearing act. First, let's check some point totals. Ryan Kesler, 13 points. Yep, that guy is obviously a playoff performance machine so that makes sense (shh, don't worry about everyone calling him a playoff disappointment in round 1 for not scoring). Second, Daniel Sedin, 9 points. Well that makes sense because he's the Art Ross-wait what? I thought this guy didn't put up points in the post season? What's he doing with 9 in 12 games? And tied for 4th with Burrows we find that other Art Ross winner loser Henrik, at 8 points.

Sure, they are both under PPG pace, which they have maintained through the last couple regular seasons as well as the last three postseasons where Daniel is at 33 points/33 games and Henrik 32 points/33 games. Hold up, what's that? They've been PPG players in the last 3 playoffs? I thought they didn't show up in the playoffs? Did I read those articles wrong?

Okay, so there goes that argument. The other one I've seen is that they only get points when the game is out of hand, or as I saw someone say "A-Rod'ing it". Let's check it out:

So that's 1 goal when the game is out of hand (the 7-2 game) and one empty netter, which I would still call important because it ices the win. So, that narrative is out the window as well.

So get off the Swedish twins already.

Or don't. If you're talking about different Swedish Twins