Oh, Sure, First You Dump All Over It, Now You Want To Know How It’s Done: Canucks & Predators - Game V

Share All sharing options for: Oh, Sure, First You Dump All Over It, Now You Want To Know How It’s Done: Canucks & Predators - Game V 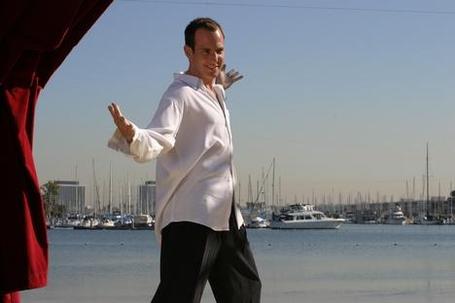 The Git-tar: On the Forecheck

Did you know? Tennessee is a mighty responsible slice of land.

All the game winners have come from Kesler (x2) and Higgins (x1), so for the first time since the lockout, we'll likely see the Sedins treated as a second line, at least as far as offensive zone starts are concerned. Trotz is no dummy; he'll probably favor getting Weber/Suter out against Kesler and leave the Sedins to deal with SOB/Klein. If that's the case, then forecast is favorable for a night of pure Sedinery to issue a statement that they're not DOA just yet. The blueline has to remain active, averaging 9 SOG for each win this series. Edler has a happy stick and Ehrhoff leads all defensemen in playoff scoring with nine points. Salo hasn't had a SOG yet, but bless his fragile frame for blocking a Weber shot 48 hours ago (I thought a piece of Salo was going to end up on my roof afterwards). A few more names to help keep Rinne on his slip-n-slide? Raymond (no points this series), Hansen (no points since game two against the Hawks) and Torres (no points in the playoffs). Make something happen gentlemen.

J.P. Dumont is our new friend, stepping in for Smithson which is a tough break for the Preds (zing!). Smithson was a constant on the PK and solid at ES. I don't think anyone is thinking they'll go away quietly and they have plenty of skaters (Kostitsyn especially) who don't want to enter the summer on their scoreless skids. Their PP sprung to life suddenly in game four and the Canucks better not gift them another two man advantage. Lastly, and more importantly, which Rinne is going to show up tonight, especially if the Canucks come out guns a'blazing?

We haven't forgotten the Wild in 2003. That wound still hasn't healed. Now we're back in those rare waters, searching for a bit of redemption.

The zero hour, Michael. It's the end of the line. I'm the firstborn. Sick of playing second fiddle. Always third in line for everything. Tired of finishing fourth. Being the fifth wheel. [thinks for a moment] There are six things I'm mad about, and I'm taking over.

Grab those lunch pails and earn this.

We've waited 17 agonizing years for this win. Let's begin a new chapter at the night's end.