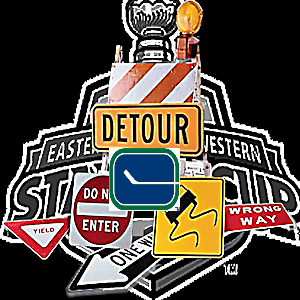 (h/t to MrsWaachcast for the pic)

Frustration seems to be a common theme today as we prepare for Game 5 tonight at Rogers Arena.  The Nashville Predators are frustrated with the Canucks, as they are showing signs of not only losing their cool, but also running out of steam.  The media are frustrated with them as they have to keep repeating falsehoods, practicing mind reading and downright inventing controversy as the Canucks continue to prove them wrong.  The fans of other teams are frustrated because with every win, their fears are being realized.  And Canucks fans are frustrated because they are being bored to the point of screaming watching games that are so slow and plodding they seem to be in slow motion.  And me?  I am frustrated that it's not game time.  Forget the naysayers who point to Game 5 of the Chicago series as evidence the Canucks won't seal the deal tonight.  If Nashville had half the goal scoring capability the Blackhawks have, they might have a point.  But this Nashville team has had to rely on a lot of puckluck just to get the goals they've gotten thus far.  This series is done, and tonight the Blue and Green march into the Western Conference finals for the first time since their fabled cup run of 1994.  Just for reference, they reached the final against the Leafs by beating the Dallas Stars in 5.  More after the jump...

Nashville's in a tough situation.  Take Suter and Weber away from watching Daniel and Henrik so they can focus on trying to shut down Ryan Kesler and Alex Burrows?  Or leave things the way they are and hope for the best.  The Sedins notched 4 points in Game 4, but most of all they looked dangerous for the first time since the first 3 games of the Chicago series.  Nashville wants to play rough, but they're finding themselves getting burned for their lack of discipline, the most notable case the stellar rush by Kesler through Shane O'Brien and Shea Weber like they were statues for the game winner Thursday night.

And it's not just the skaters that are getting frustrated.  The body language being shown by Pekka Rinne speaks volumes.  He slams his stick on the ice.  He's combative with the officials.  And he is pissed off about the traffic getting to the front of the net.  The Canucks have done an increasingly better job of trying to find Rinne's weaknesses, and will do what it takes to get him off his game.

Apart from a strong series from Joel Ward, the guys that coach Barry Trotz looks to for his offence are simply invisible.  Strong team defence from the Canucks, especially where the D are stepping up to the line to meet rushes have neutralized the effectiveness of Mike Fisher, Sergei Kostitsyn and Martin Erat, as well as the booming shot of Weber from the point.  The Canucks continue to show signs of the dominance they exhibited throughout the season, where their defence routinely shut down some of the best offences  in the game.

The importance of the Canucks winning tonight isn't lost on them either.  They've said they're approaching this as they would a Game 7, and that's not a bad plan.  Winning means a couple days off to rest and prepare for the winner of the San Jose Sharks/ Detroit Red Wings series, though I would imagine they would love to see Detroit extend the series beyond Sunday's Game 5.  Let's face it, if there was a team that could come back from 3 down, it's Detroit.

Hands up if you had both Eastern Conference series' being sweeps.  Liars.  Not sure which one was a bigger surprise, but when you consider the utter goaltending fiasco the Flyers went through, it shouldn't really come as a surprise.  Add in the loss of Chris Pronger, and a Bruins team far more equipped to deal with the Flyers this time around and it was almost a foregone conclusion.  And kind of fitting the one guy for the Bruins who hadn't shown up in the playoffs had a huge game to put the nails in the Flyers' coffin.  Milan Lucic scored his first 2 goals of the playoffs and was a threat all night.  So now we see two fairly evenly matched teams going head to head for the right to be the Eastern representative in the Stanley Cup Finals.  Sweep?  Not in this series.  Not a chance.  This one will be a war.

One of the albums that helped announce the beginning of the NWOBHM (New Wave Of British Heavy Metal), a band that was already established worldwide took a massive step forward as one of the leaders of the scene with British Steel.  Much rawer and in your face than previous albums, the dual guitars of KK Downing and Glenn Tipton, as well as the Metal God himself, Rob Halford become superstars with this album, every track solid, and all of them becoming mandatory listens for anyone who calls themselves a metalhead.  Even the album art was metal as fuck, the razor blade becoming synonymous with the band from this moment on.  The album is 31 years old now and still kicks the listener's ass as much as it did back then.

and as a bonus... here's a kickass cover of Grinder by Germany's KREATOR: