Thursday Morning Coffee- It looks a lot worse than it actually is.

Share All sharing options for: Thursday Morning Coffee- It looks a lot worse than it actually is. 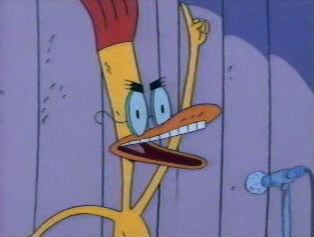 The accusations have come flying fast and furious.  The Canucks are divers.  Nashville and their fans are crying foul over a couple penalty calls in the last game, and that of course has been amplified into outrage by fans of other teams and media.  Nashville head coach Barry Trotz said "That’s gamesmanship, and I understand that... It’s also a little bit putting the referee in a tough spot. We have the best referees. If you’re going to make them look bad, I don’t think that’s needed in the game."  That comment was mild compared to what some of his players were saying after the game.  Was the Luongo penalty a bad call?  Yes.  The Kesler one?  No.  You can sit there and whinge all you want about making that call in OT, but when Weber hooks Kes and stops moving his feet for a 5 count right in front of the officials, what are they supposed to do?  So Nashville fans crying foul rings a little hollow.  Why?  Let's just say it's about fowl, not foul...

The interesting thing about the playoffs is that sometimes, the previous round seems so far away, it may as well have been last season.  Sure I could point out that the Canucks had to deal with a mountain of press more concerned about what happened the last two post-season meetings against the Blackhawks, but whatever.  No today I want to talk about the hypocrisy of the Preds and their fans, and the media's sudden memory loss.  Yes, let's talk fowl, shall we?

It was in the first round that the Predators faced the Anaheim Ducks, and Anaheim coach Randy Carlyle and GM Bob Murray were angry about a number of instances where they felt the Preds were diving, leading Murray to quip that his Ducks would need to start diving like the Predators to draw penalties. The response from Trotz?  "I think it's more disrespectful to the players that are playing in the league," Trotz said.  He went on to point out that Anaheim had approx. 500 more penalty minutes than Nashville during the season.  That to me speaks volumes.  It's not like the officials don't know who's on the ice.  So it wouldn't be inconceivable to engage in a little 'gamesmanship' if you knew it could benefit your team, right?

Every team embellishes calls.  Especially with the stakes so high, players are going to do whatever it takes to get a shot at the Cup.  The moral outrage aimed towards the Canucks, when it was the Preds themselves being accused of the same thing is ridiculous. There are good calls and bad calls.  The Canucks have found themselves on the other side of that coin more often than not.  Conspiracy?  Nope, just the way it goes.  But before you start putting labels on this team, a glance into the mirror would help.

While a number of people predicted Tampa Bay would beat the Washington Capitals, I would venture to say only a handful said they would sweep them.  Once again they are trying to figure out what went wrong in DC, as regular season success didn't translate into a long playoff run.  The big question now is will they make coach Bruce Boudreau walk the plank, or give him one more shot.  From a number of their big guns going silent, to a defence that seemingly forgot how to defend, and a goalie that couldn't get it done, the Caps have a number of issues to look at now that they're done... I have to say I am shocked that the Detroit Red Wings are in danger of being swept by the San Jose Sharks, especially after the way they systematically destroyed Phoenix in the first round.  The team that looked like a post-season juggernaut now looks old and tired against a Sharks team with something to prove, and the Wings will need a miracle to salvage this series... Meanwhile it's Deja-vu again as the Bruins sit ready to eliminate the Flyers in 4 straight.  Once again goaltending is a major concern for Philadelphia,as their goaltending by committee act seems to be running out of steam.  The odds of them coming back again this season are astronomical to say the least, and without a goalie that they can get 60 minutes out of, this Flyers team is done like dinner... After dropping the first two games of the series, the Manitoba Moose took advantage of home ice and rattled off a couple wins against the Hamilton Bulldogs.  Mario Bliznak notched the winner in double overtime last night to tie the series at 2 a piece.  The Moose were close to losing this one, but a Guillaume Desbiens goal with 2:02 left in the third sent it to OT.  Game 5 goes Friday at the MTS Center in Winnipeg, with game 6 in Hamilton Sunday.

The second album from this band, it saw them move from their thrash roots to a more death metal sound, and in doing so became a very influential album on the burgeoning death metal scene.  This was the band's last album with bassist/ vocalist Martin Van Drunen, and the band would release two more albums before calling it a day.  They reunited in 2008 with a new album, and toured North America last year.