Share All sharing options for: You Need Tickets? TiqIQ Wants To Help 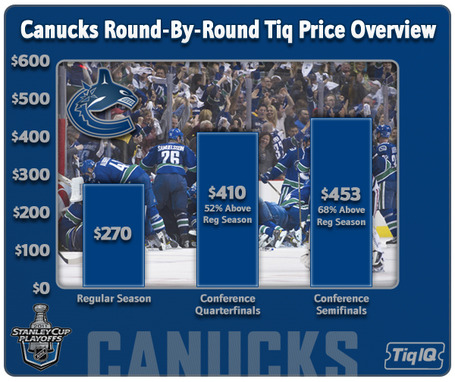 Few fans are more aware that ticket prices can suck than Vancouver Canucks fans. It's tough to get your hands on them, meaning you're often left to secondary resellers, websites or begging a buddy for a spare ticket (as someone who begged Big Daddy Zandberg for a ticket to the only home game I've ever seen, I know this all too well). Our new partnership with TiqIQ won't change this, but by aggregating various ticket retailers' prices (StubHub, eBay, etc) and allowing you to see to see the best priced tickets in various sections in one view, we trust it'll at least make your ticket shopping easier.

SBN has added a link to our navigation for tickets. By clicking there you'll be brought to the NM ticket game center where you can sort through prices for both home and away games. TiqIQ uses a color coding system that helps indicate when price is a good or bad deal. It may take some getting used to at first, so if you some time dive in, bring up a game and see what options are available. Over time (think the 2011-12 regular season) it's my understanding that TiqIQ can predict what future game tickets will cost so, for example, Canucks/Blackhawks tickets may skyrocket but will drop for some East Coast team visits. Further down the line we may have a chance to get a deep discount for another NM meet-up if we want to risk upsetting the hockey gods in person again. 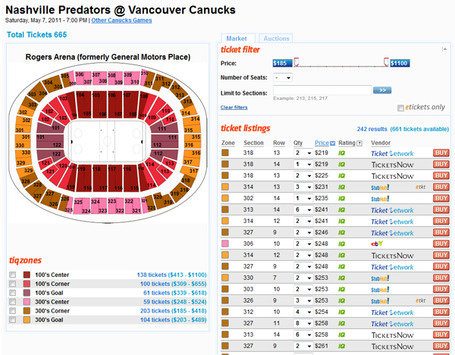 SB Nation first began working with TiqIQ back in November and so far it has been well received. You'll see similar options at other SBN sites, including our current opponent. As part of the deal, there will be an occasional tweet on our channel informing you of ticket prices for upcoming games (What's that? You don't follow us? For shame, go fix that buddy).

The overall goal is the partnership adds some value to NM and brings you one step closer to the game. In full disclosure, we behind the curtain get a relatively small percentage of every ticket that gets sold through our site. It's not much (remember: bloggers work in basements), but it's one of a few ways we want to reward the writers you enjoy here.

If you have any questions, feel free to comment below or email me. Thanks to Jeremiah at Sounder at Heart for the scoop on how TiqIQ works.