Share All sharing options for: Media Day **Updated with photos**

Talk about crazy!  Wall to wall cameras, mics and every single hockey media personality you can imagine.  Did I mention I saw Dave Babych?  The Canucks made everyone available, and while I get my audio and video issues sorted out, feel free to discuss your thoughts on it all.  By the way if you have NHL Network that seems to be the best source for live feeds from Rogers Arena.  Mrs Waachcast said she's lost track of how many times she saw me.  Heh.  And there's no truth to the rumour that Tanner Glass was involved in an altercation with a bear on his way to the rink this morning.  Just putting that out there.  Going to get a look at the opposition now, so I will be back later with a whole lot more of what's been a pretty intense day here at Rogers Arena.  I don't think that's the real Stanley Cup on the NHL Network set, but I will find out.  Upcoming:  Video from Kevin Bieksa, Roberto Luongo, Ryan Kesler, Cody Hodgson, Alex Edler and some of the Mike Gillis/Alain Vigneault presser. 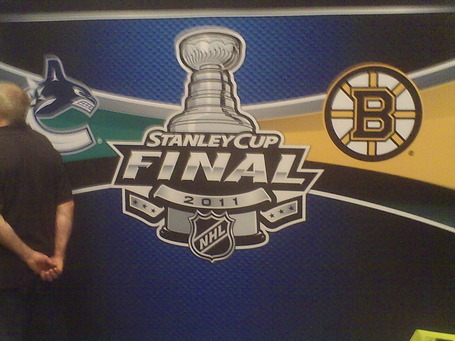 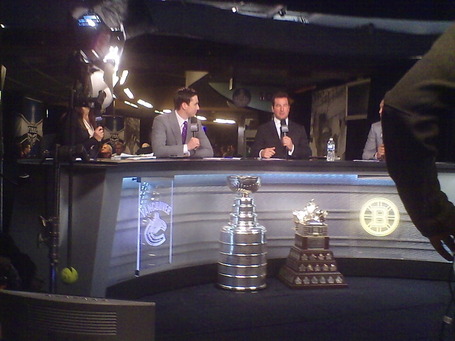 If I were mean I would say that's the closest Marty Turco will ever get to the Cup... but I'm not like that. 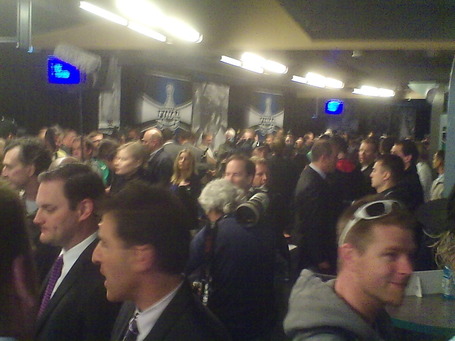 Dan Murphy is somewhere in this shot... I think? 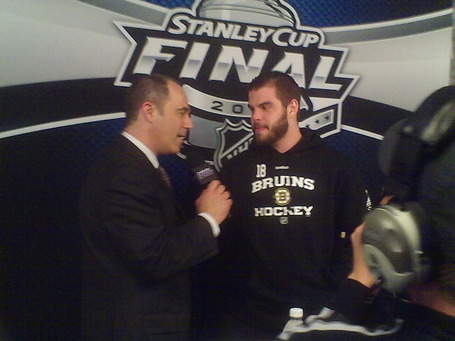 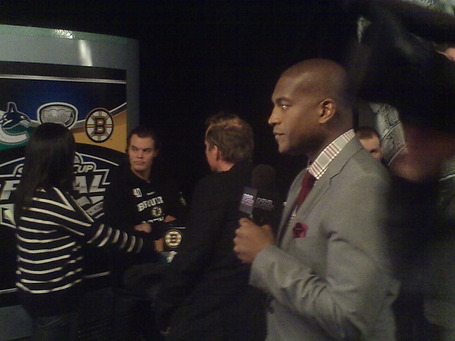 Still working on uploading the videos, my apologies, but I will get them to you.

My impressions?  Overall the Canucks are they way they've been all season: confident without being cocky, very aware of the task ahead, respectful of their opponents yet to a man they believe they can see this through.  There were some issues it seemed with availability of some of the Bruins players (there was a large media scrum waiting for Mark Recchi, for pretty much the entire time I was there for the Bruins portion of the afternoon).  It was quite an experience, watching these guys at work, and the players absolutely soaking up this moment.

The Canucks are on the ice for a morning skate at 9am and they will be available to the media after that.  The Bruins will be skating at 10.  Hopefully we can get an update on Manny Malhotra's status, but remember that his health comes first.  Yes it would be amazing to see him on the ice tomorrow, but his health is the most important thing.  I will be there, caffeinated and ready to get you a look at some behind the scenes stuff, along with a look at the Game 5 MVP: The Stanchion.  That and much more as we prepare for war...